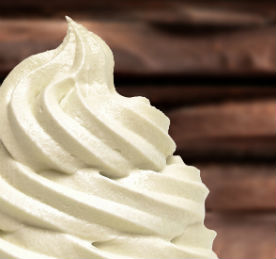 The total sugars present in dairy products are usually a combination of intrinsic and added sugars (often added to increase sweetness). The intrinsic sugars refer to the naturally occurring sugars already present in milk and, therefore, also present in most dairy products. Lactose, a disaccharide formed of glucose and galactose units, is the only intrinsic sugar present in milk. The level ranges 4.2–5.0%. Lactose has very low solubility in water and, consequently, if not treated correctly, it can confer a ‘sandy’ texture in concentrated milk or frozen dairy products. Like any sugar, lactose greatly contributes to the physical properties of milk. Changes of lactose levels in milk will determine parameters such as osmotic pressure, freezing point and boiling point. These parameters will need to be taken into consideration when reformulating dairy products containing added sugars.

Since lactose is considerably less sweet than sucrose, the addition of other sugars or sweeteners can be necessary in dairy products in order to increase the sweetness to the desired level. Additionally, the total sugars present in products such as yogurts, trifles and cheesecakes containing fruit preparations can also be increased by the sugars present in the fruit layers. These will contain the naturally occurring sugars found in fruit (mostly fructose, glucose and sucrose) as well as the added sugars used to confer the right sweetness to the fruit layer. Finally, numerous other components containing sugars are used in frozen desserts and yogurt; for example chocolate chips.

While the main aim of adding sugars to dairy products might be increasing the sweet taste and flavour, sugars also impart numerous other functional properties such as desirable organoleptic attributes, better shelf-life, and chemical and physical properties.

The presence of sugars affect the freezing point of ice creams and frozen dairy products since the freezing point decreases as the concentration of sugars increases. A low freezing point is an important parameter in frozen products as it reduces the formation of large crystals of ice that might confer a gritty texture. Since dissolved sugars have the ability to bind water, diminishing the water available for crystallisation, the addition of sugars therefore promotes the formation of small ice crystals that are not noticed in the mouth, thus preserving the smooth, soft texture of ice creams and frozen dairy desserts.

Sugars provide good dispersion of fats in ice creams. They also increase the stability to heat shock and preserve the texture when the products are subjected to freeze-thaw cycles. Additionally, sugars increase the viscosity or thickness of frozen desserts, yogurts and flavoured milks, which helps to increase the smoothness perceived in the mouth. Sugars, despite not being fat substitutes, can be used in lower-fat products to increase flavour, texture and to supply bulk for the missing fat.

Sugars also protect proteins from denaturation and have the ability to stabilise protein foams. These two attributes are very important in custard and mousse applications. The sugars present in a custard help to disperse the protein molecules within the mixture and increase the setting temperature of the custard, allowing the egg proteins to coagulate slowly and entrap the rest of the ingredients, forming a homogeneous gelled matrix.

The low temperatures of frozen desserts affect flavour perception since taste buds become less sensitive. In this case, sugars act as a flavour enhancer, eliminating the need for additional flavouring.

In chocolate-flavoured milks, the addition of sugars serves to increase the product viscosity to impart a richer, thicker mouthfeel, and also to enhance the flavours of the cocoa and milk.

Sugars are also necessary as a precursor in the development of flavours through caramelisation in some desserts such as crème caramel or sweetened condensed milk, where the sugars are subjected to high temperatures promoting changes in colour (browning) and the creation of new flavours. Sugars are important in some dairy desserts such as crème brûlée where a burnt-sugar crust gives the typical flavour, appearance and texture of this dessert.

Sugars play an important role in the preservation of products such as condensed milk. The high levels of sugars present in this type of product increase the osmotic pressure of the media, where microorganisms are not able to grow and multiply, and the shelf life of the product is amply extended.

The added sugars in fruit preparations found in some dairy desserts possess functional properties other than providing sweetness and bulk. Sugars are also essential in the gelling process of such preparations since they greatly influence the gelation ability of the gelling agent (pectin) normally used in such preparations. Sugars prevent the spoilage of these products by lowering their water activity to levels where microorganism growth is inhibited. In addition, they also help retain the colour of the fruit by attracting and holding water, preventing the fruit from absorbing water that would fade it by dilution.

Stirred and set yogurts can be made using acesulfame K and sucralose as these are not degraded during fermentation. Blends of acesulfame K with aspartame and/or sucralose offer optimal sweetness and flavour impact. The addition of small quantities of oligosaccharides such as inulin, oligofructose and polydextrose, or tagatose can round off the sweetness profile and usually provide improved mouthfeel in low-fat yogurts. For layer-style yogurt, the addition of thickeners is recommended in order to avoid mixing the fruit and yogurt layers. Aspartame can be used in sour milk products since it is stable at a low pH (around 4) where hydrolysis occurs at a very slow rate. However, it might degrade during the fermentation process in set yogurts as the fermentation temperature and neutral pH accelerate the degradation of this molecule. In order to overcome this problem, it is advisable to use cultures that quickly decrease the pH of the milk. In layered yogurts, aspartame can be added to the acidic fruit component to completely avoid the loss of sweetener. In any case, aspartame should be used in short-shelf-life products only owing to its stability.

In flavoured milks, intense sweeteners can be used in energy-reduced and ‘no added sugar’ products. However, polyols are not permitted when used in formulations for sweetening purposes. In flavoured milk and cocoa beverages, acesulfame K, aspartame and sucralose have the advantage of being fully stable during high temperature treatment and subsequent storage at room temperature for several weeks. Depending on the desired sweetness level, these intense sweeteners should be used as the single sweetener, or in blends with other stable sweeteners such as sucralose or cyclamate. Blends with aspartame should only be used for products that have a limited shelf life, preferably in products intended for storage at low temperatures. Aspartame is not suitable for milk products with a neutral pH. Stevia can also be used in flavoured milks as it is able to resist high-temperature treatments (up to 140°C for one hour) and subsequent storage at room temperature.

In ice cream, sugars are used not only as a sweet-tasting compound but also as a functional ingredient. Therefore, this functionality must be replaced by adding bulking agents such as polydextrose or polyols. However, high-intensity sweeteners such as acesulfame K, sucralose and neotame, which are not affected by pasteurisation and storage, can be used to increase the sweetness of an ice cream containing polyols. Aspartame, albeit not being stable at neutral pH, can be used in ice creams, since the low temperatures prevent its decomposition. Different combinations of bulking agents can be used to achieve the required freezing point depression. This, consequently, will influence the amount of intense sweeteners used, as the different bulking agents provide different levels of sweetness. Fructose offers another approach in reducing sugars in frozen desserts as it has an excellent taste as well as flavour-enhancing qualities. Fructose has a sweetening power 1.7 times of that of sucrose and, therefore, the sugars content can easily be almost halved by substituting sucrose with fructose in dairy frozen products. Being a digestible carbohydrate sugar with the same calories as sucrose, fructose decreases the freezing point further than sucrose.

It is crucial that prior to any reformulation, the regulatory restrictions are checked to identify permitted ingredients for the different categories of products.