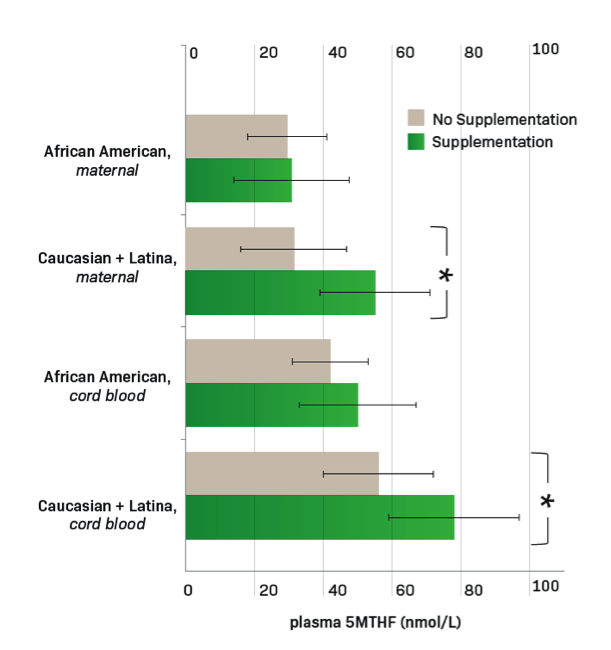 A single-centre, prospective, cross-sectional cohort study just published in the Journal of Maternal-Fetal & Neonatal Medicine by Maulik D. et al, demonstrates that, regardless of race, the most plentiful physiologic folate in both cord and maternal blood is 5-methyltetrahydrofolate (5-MTHF) which is consistent with findings from previous studies.

The study analysed 40 mother-cord blood pairs, of African American, Latina and Caucasian women at gestational age 39 ± 1.8 weeks. The majority of patients (57.5%) took prenatal vitamins during pregnancy at the time of prenatal intake. Among the different races, 45% of African American, 66.7% of Latina, and 60% of Caucasian women used supplementation.

Statistically significant positive correlations between maternal and cord blood 5-MTHF were observed in all three racial groups, suggesting that maternal 5-MTHF levels are consistently predictive of fetal folate status. These two findings together imply that 5-MTHF plays a critical role in both maternal and fetal folate-mediated processes during pregnancy.

With regard to racial differences, this study found African American mothers had a lower folate status and a less dramatic response to supplementation, in comparison to the other racial groups, and this trend similarly affects cord blood concentrations. 5-MTHF drives most of these differences seen with supplementation and race.

This finding may support a recent postulation that 5-MTHF may be a better repletion strategy than folic acid among reproductive females. Folic acid must be deglutamated and reduced prior to eventual conversion to 5-MTHF and entry into the folate cycle. However, by bypassing these additional steps, 5-MTHF may offer a more direct form of supplementation that more readily rectifies these racial differences in a way that positively affects the fetus.

Cord blood concentrations were significantly higher than their corresponding maternal levels in all folate species, with the exception of folic acid.

Supplementation appeared to primarily affect 5-MTHF concentrations, with higher levels noted with prenatal vitamin use in both maternal (45.1 versus 31.1 nmol/L, p < .001) and cord blood samples (67.3 nmol/L versus 49.1/L nmol, p < .01), while not similarly affecting the concentrations of other folate species. Interestingly, folic acid concentrations were noted in both maternal and cord blood of pregnancies where the mothers reported no prenatal vitamin use, which was probably indicative of folic acid consumption via grain fortification.

“There is ever more increasing evidence on the importance of supplementing the 5-MTHF active form of folate” said Lorena Carboni Product Support Specialist of Gnosis by Lesaffre. Finally, everyone can more consciously choose the forms of active folate, such as Quatrefolic® the glucosamine salt of 5-MTHF, to ensure nutrient effectiveness and safety in all the functional areas for which folate supplementation has been recommended and allowed.