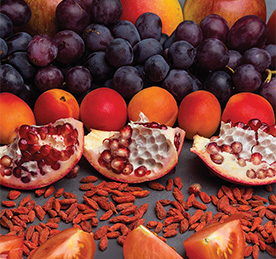 Could you tell us about your background, and what work you do at the Natural Algae Astaxanthin Association (NAXA)?

Alan Levine: I have had a career in the natural products industry for more than 25 years. I have worked in organic raw material supply, finished supplement sales and allergen-free foods. I have worked in North America, the EU, Asia and Australia, and have shown the US and international clients how to extend their funds when exporting natural products. Ford Levine Sales Group serves as a sales and marketing team for top and emerging natural products companies, with an emphasis on companies that have new, sustainable product types, technologies and scientific studies that support their lines. In January 2020, I became president of NAXA. It was important to the organisation to find someone who was familiar with the industry, and who could run NAXA in an enthusiastic, ethical and impartial manner. It is a true honour to have been chosen to lead an organisation that promotes scientific study and consumer protection for a category of product about which I am passionate.

In general, have you seen an uptick in the popularity of antioxidants for a healthy lifestyle?

As a powerful antioxidant, algae astaxanthin works throughout the body. According to our membership, across the board, there has been a strong uptick in algae astaxanthin popularity. Historically, consumers who try it end up taking it long term. It becomes part of the daily routine. So, it creates a sustained upward trend.

Consumers take supplements as both a treatment and as a preventive measure. With Covid-19 at the forefront of everyone’s minds right now, prevention seems to be key. People are looking for supplements that will boost their immunity. Algal astaxanthin, derived from Haematococcus Pluvialis, is the perfect supplement in both cases. There is strong evidence that it can help prevent a variety of conditions, and there are multiple clinical trials showing that it helps modulate the immune response.

In particular, a series of studies at Washington State University led by renowned immunity researcher Dr Boon Chew tested astaxanthin from algae for immunity, first in test tubes, then in a series of mammals starting with rodents, and then in cats and dogs. The study culminated in a landmark human clinical trial. In each case, algal astaxanthin usage led to an increase in a variety of immune markers, while at the same time dramatically lowered DNA damage and reduced systemic inflammation (as measured by CRP levels).

This immunity benefit for algal astaxanthin has led to a big increase in use by consumers. Astute brands have been working hard to educate consumers about these specific benefits during the pandemic.

Could you talk us through the basics of astaxanthin. For example, where it is found naturally, and what its primary uses in nature are?

Astaxanthin is a naturally occurring dark red carotenoid found in nature primarily in aquatic animals such as salmon, trout, krill, shrimp, crayfish and crustaceans. The microalgae Haematococcus pluvialis, which grows in freshwater all around the world, is the richest natural source of astaxanthin. Humans, unlike crustaceans, cannot synthesise astaxanthin and have to acquire it through their diet. According to an excerpt from Michael T Murray, in his e-book study titled The Whole-Body Benefits of Natural Astaxanthin, “Natural astaxanthin produced from various commercial sources differ in many parameters such as chemical characteristics, bioavailability and metabolism.

“Compared with all the other sources, Haematococcus pluvialis, a freshwater algae, is the richest source of astaxanthin in nature. It can accumulate up to 50g of astaxanthin per kilogram of dry biomass under environmental stress, such as elevated temperature or UV exposure.”

Astaxanthin is more than just a red pigment: it is one of the most powerful lipophilic antioxidants yet discovered. It has the unique capacity to quench free radicals and reactive species of oxygen, and to inhibit lipid peroxidation. Studies have shown natural astaxanthin to be over 500 times stronger than vitamin E, and much more potent than other carotenoids such as lutein, lycopene and beta-carotene.

“As a powerful antioxidant, algae astaxanthin works throughout the body. According to our membership, across the board, there has been a strong uptick in algae astaxanthin popularity. Historically, consumers who try it end up taking it long term. It becomes part of the daily routine.”

Moreover, astaxanthin, a xanthophyll carotenoid, is a nutrient with a unique molecular structure; it does not convert to vitamin A (retinol) and has no pro-oxidant activity. Numerous studies from around the world have established the use of natural astaxanthin produced from Haematococcus pluvialis microalgae as a potent antioxidant with proven beneficial effects for human health.

“The clinical research on astaxanthin from algae has been accelerating in recent years. Algal astaxanthin has been known since the 1950s to support eye health in a variety of ways, for example.”

Astaxanthin was shown to decrease the risks of certain chronic diseases related to oxidative stress. It also supports healthy cardiovascular activity, improves muscle strength and endurance, and prevents premature skin ageing and joint health. Additionally, astaxanthin protects the body under stress conditions, and has anti-inflammatory and immune-stimulating effects. Astaxanthin has been shown to actually cross the blood-brain and blood-retinal barriers, meaning it can positively impact disorders related to the eyes, brain and central nervous system, among others.

In general, what are the practical benefits of the fact that astaxanthin is totally natural?

How are you doing in terms of marketing astaxanthin in practice? Are its medical benefits accepted by regulators?

In the US, brands have established many health claims around algal astaxanthin’s ten clinically validated health benefits. Other markets vary considerably, and some, like the EU, have not allowed health claims to date. In those markets, consumption is still increasing due to publicity about the 100-plus human clinical studies on algal astaxanthin that demonstrate its effectiveness as both a preventive and therapeutically active ingredient.

More broadly, what are the other challenges to bringing astaxanthin more into the mainstream, and what is NAXA doing to help?

How do you expect astaxanthin – and similar carotenoids – to change our attitude towards health in future?

The clinical research on astaxanthin from algae has been accelerating in recent years. Algal astaxanthin has been known since the 1950s to support eye health in a variety of ways, for example. But only over the last few years have clinical studies been published showing it also benefits brain health. As this research is published and then publicised, more people will begin to incorporate it into their supplement regimen. People’s attitudes naturally change when they see clear clinical evidence that a single supplement can help them in ten different ways.

What does NAXA have planned in the next year especially?

We are excited to be moving forward with new studies in 2020 and 2021. A new study will look at astaxanthin on a molecular level. Then we have a series of in vitro studies planned.

We also hope to work with other trade groups in the near future to collectively address mislabelled products being sold online. This is an issue that is a growing concern for all legitimate producers across the supplement industry.

“Astaxanthin is the crowned king of antioxidants,” Murray has explained on his website. “It is given this title because of its unique benefits and actions in promoting health and protecting against cellular damage, especially in the brain and vascular system, and I’m excited to help educate the public about its unique benefits.”

Natural astaxanthin is able to protect both the brain and eyes, and has hundreds of clinical and experimental studies showing benefits in the following areas: