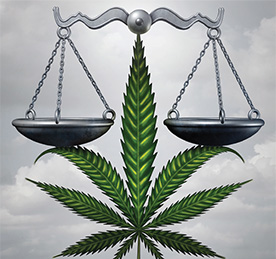 Could you tell us about your background and your work with the European Industrial Hemp Association (EIHA)?

Lorenza Romanese: I’m the managing director of the EIHA. I’ve been working [there] since February 2019. Prior to this experience with hemp, I was working and defending the interests of European wine growers – defending and representing 12,000 small and medium-sized enterprises producing wine in Europe. And prior to that, I was working at the European Commission in the oil and gas sector as a lobbyist. The EIHA was founded 25 years ago. It represents both farmers – the ones who plant and grow hemp – the processing companies, as well as companies that sell hemp-related products on the market. These are the main three actors that we represent. Because we have the farmers and the industry together in the same association, we are covering all European policy, from the field to the labelling, the final product.

How have you seen the market change in the time that you’ve been at the helm of the organisation?

I jumped into the sector on the day the European Commission decided [in early January 2019] to switch hemp from [being a] food to novel food. So, the industry is currently suffering because of the lack of clarity from a regulatory perspective. If there is no clear or stable framework for this product, there will be no more investment and Europe will end up being the supermarket of other continents. This is a pity because all the benefits of growing hemp will [go] outside [of Europe]. And all the money involved in this sector will go outside of Europe too. So, it’s a pity.

I jumped into a sector that was growing – I would say that there are no other agricultural crops that have performed so well in the last ten years. We have seen an increase of 600% in [yield in] those last ten years, in which the land has been cultivated with hemp. However, now the sector is stagnant because of this regulatory framework that is missing, which is affecting the entire economy of hemp. This is why it’s so crucial that we are in Brussels [the centre of EU legislation]. It’s so crucial that we keep speaking with the authorities, and that we have many solutions to provide for our members, such as the novel food consulting that we are creating.

CBD has become extremely popular in the last few years. What’s your position on it?

CBD has been the driver for the sector. CBD has exploded and is still increasing even though the price now is less than the price ten years ago – but it is still a good market. It is the driver that we need to have in order to invest the money for the textile industry. CBD is also going very well when it’s sold as a food supplement and as a cosmetic, simply because there’s a trend today that people want to eat better and eat less meat, less processed food. Hemp is a superfood and it is consumed on a daily basis.

Let’s say it’s a maintaining properties food supplement. So, you take a little bit of CBD every day and then this will increase your immune defence. CBD is not a medicine in the concentration that we are using. It cannot be treated as a medicine; it has to be treated as a food or a supplement. This is the category where we want to see this product, and this is the category where this product has been sold for the last 20 years. Now, everybody speaks about CBD, but CBD has been present before last year as well. So, it’s a very interesting market. We are seeing an increasing use of this, not only in Europe, but in other countries as well. China is moving very fast, and Canada and the US as well. We are only waiting for regulation.

What are the major health benefits of CBD?

“The EIHA was founded 25 years ago. It represents both farmers – the ones who plant and grow hemp – the processing companies, as well as companies that sell hemp-related products on the market.”

So, if you take CBD on a daily basis, we see that your well-being increases as your immune system increases, and it can give you a little bit of pain relief because it’s anti-inflammatory and 30 times more powerful than ascorbic acid, or vitamin C.

Why do you think you’re seeing some barriers to the growth of this market?

People and decision-makers do not understand that cannabis is hemp, not marijuana. All of the vegetables that we have in our fridge belong to a botanical family. It’s exactly the same with hemp – it has a botanical family. So, within the same family we have different varieties with more or less THC [tetrahydrocannabinol, the psychoactive component of cannabis]. Hemp is a plant that does not contain any psychotropic principle because we have less than 0.2% of THC. So, one of the roles EIHA is taking care of in Brussels is to educate decision-makers.

And how will the recent (October) European Parliament vote in favour of increasing the THC level for industrial hemp affect the market?

We tabled an amendment in February 2019 asking to increase the level, to restore the level that had been in place in Europe until 1999.

If you do a historical overview of this level, we see that during the Second World War, the [regulated THC] level was 0.5%. And then this was decreased because of healthcare reasons. In order to make a clear distinction between marijuana and hemp, the level was decreased. So, then we reached 0.3%, and 0.3% was in place until 1999. This was then decreased.

By decreasing the level in an arbitrary way, without either consulting or bringing to the table some scientific evidence that demonstrated that 0.3% was a problem for consumers, the level was decreased in 1999 to 0.2%. In this way, they [the EU] created a monopoly because only French varieties could stay on the market because they were the ones producing fibres containing 0.2%.

Therefore, we have been speaking and meeting regularly with the members of the European Parliament. We have explained that there is no healthy reason to stay with 0.2%. We are leaving out of the European catalogue many varieties that cannot have 0.2%. In Finland, for example, where the light and sun is not the same as in Sicily, the plant is flowering later and if you test them at the same period as others, they give different values because the Finola [a hemp variety grown in Finland] is not mature enough for the cannabinoid levels to drop.

We explained that by sticking to the 0.2% rule, they were lifting out of the market many operators coming from Finland, Poland, Czech Republic, Slovakia and from Italy. In the end, after lobbying, the European Parliament voted positively.

We want the 0.3% THC level because everybody has 0.3%. Canada has 0.3%. Switzerland has 1%. China has 0.3%, the US has 0.3%. Meanwhile, we [in Europe] were the only ones with 0.2%. So, we want to align with all the other stakeholders on this market. We want to have the 0.3% because we have been breeding the same 69 varieties for 20 years. You don’t need to be an agronomist to understand that if you keep breeding the same varieties over and over, the plants are getting weaker.

As of October, the authorised THC level in hemp that is allowed to be produced in the EU.

How do you think the Covid-19 crisis may change the CBD market, as consumers become more conscious of their health and mental health?

It is an accelerator of a trend and the market grows so fast – regardless of Covid-19. These markets grow because people want this product, and consumers are asking for this product. Consumers are ready to buy it even if it becomes illegal – 66% of people according to a survey in the Netherlands. For sure, the virus accelerated this trend, because now people want to stay healthy to avoid getting sick.

And one of the ingredients that you can take on a daily basis, if you want to maintain your balance, is CBD. So, we have seen a peak and increase of selling, especially in the first financial period. The downside is small operators that jumped into the market last year or this year are giving up because it’s so complicated at the moment.