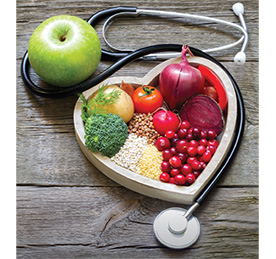 One of the least-discussed repercussions of the Covid-19 pandemic has been its impact on heart health. Often typified as a lung condition, this strain of the coronavirus can also have knock-on effects to the heart, and people with existing heart diseases are at greater risk of poor outcomes. In fact, there is evidence to suggest that those with cardiovascular conditions are nearly 12 times more likely to die if they contract the virus.

There are a few reasons why this group is so vulnerable, but the main factor is that a diseased heart has to work harder to pump oxygenated blood through the body efficiently. Add in Covid-related lung damage, and it’s easy to see why the circulatory system might run into problems.

Covid-19 has also been linked to a higher risk of blood clots, which, in turn, increase the risk of heart attack or stroke. Further complications can include inflammation of the heart or heart rhythm disturbances. Even among younger, healthier patients with no previous history of cardiovascular disease there may be lingering heart damage.

“The Covid-19 virus has the unpleasant tendency to land in the small alveoli of your lungs,” says Professor Joep Perk, a clinical cardiologist and member of the European Society of Cardiology (ESC). “The consequence is that, if you get a lot of inflammation and a lot of fluid in there, the pressure becomes higher and people with a weak heart will have problems delivering the amount of oxygen needed. The heart is battering on a locked door.”

Unfortunately, the risks posed by the virus itself are only one factor in the mix for heart disease patients. As Perk explains, the lockdowns imposed across Europe also took their toll.

“At the beginning, our heart patients were afraid to come to hospital, even when they had a heart attack,” he says. “They would come to hospital a few days later when there was already a lot of damage. Over the first few weeks of the pandemic, the official number of patients with acute heart disease in most European countries halved. This wasn’t because they were getting healthy – it was because they stayed at home and died.”

While Perk thinks Europe is now past this phase, Perk remains frustrated with the lack of resources allocated to cardiac care. With so many nurses moved to infectious disease departments, healthcare systems have struggled to function as normal. Many patients with heart disease, who were booked in for elective surgeries, saw their procedures postponed.

The heart of the problem

Then there are the ways the lockdowns have affected people’s everyday lifestyles. Stuck at home, many people became less physically active and were less able to maintain a healthy diet, which we know is deleterious for the heart. Directly and indirectly, then, Covid-19 has created a perfect storm for negative heart outcomes. The need to address the burden of cardiovascular disease is more pressing than ever before.

On 25 June, the ESC, together with the European Heart Network (EHN), launched the document ‘Fighting cardiovascular disease – a blueprint for EU action’. Targeted at decision-makers across the EU, the document is a call to action, providing a range of practical steps the union can take to improve the population’s heart health.

While this document is not directly related to Covid-19, its conclusions hold even more weight in the context of the pandemic. Speaking at the launch of the paper, which took place through a virtual meeting, European Health Commissioner Stella Kyriakides said, “Cardiovascular disease is the leading cause of death in the EU and the world. The Covid-19 pandemic has highlighted the importance of well-functioning health systems and the need for us to take action.”

EHN president Floris Italianer added, “Because of the scale of the disease and the many risk factors and lifestyle determinants, cardiovascular disease is best described as a societal disease. As such, effective regulation and population-wide interventions are necessary to prevent it.”

As the blueprint details, around 60 million people in the EU live with cardiovascular disease, with around 13 million new cases and 1.8 million deaths every year. Many of these patients have comorbidities, placing an additional burden on healthcare systems. And while mortality is declining, the rate of decline is slowing.

There are significant geographic and social inequalities too, with some EU countries reporting an increase in premature cardiovascular disease deaths for the first time in 50 years. For instance, a woman in Lithuania is 13 times more likely to die prematurely from heart disease than a woman in France.

“The difference between central and eastern Europe – countries like Bulgaria – and Western Europe is very large,” says Perk. “Smoking and nutrition play an important role. So, in these countries, we have a lot of work in prevention still to do.”

People in the EU that suffer from a cardiovascularrelated disease.

People in the EU that die from cardiovascular disease.

Deaths from heart disease per year in the EU that are associated with unhealthy diets.

Nutrition is an especially salient factor. The document states that unhealthy diets are associated with over 800,000 deaths from heart disease in the EU every year, or around 40% of the total. Dietary factors account for almost 45% of the total years lost to cardiovascular-related death or disability.

To address the situation, populations will need to move towards a more heart-healthy diet. This would entail reducing saturated fat consumption to less than 10% of all calories consumed. Salt consumption should be no more than 5g per day, and we should eat at least 12.6g of fibre for every 1,000kcal consumed. In more general terms, we should be moving towards a largely plant-based diet. As Perk puts it, environmental consciousness and healthy eating go hand in hand.

“In cardiology, we want people to eat sustainable food – sustainable for your body but also sustainable for the planet,” he says. “We also want people to go from red meat to plant-based food patterns. It’s a positive approach for the industry to be health conscious and sustainability conscious at the same time.” The report sets out three recommended priority actions relating to nutrition, which EU policymakers should aim to achieve by 2024. These are:

“The evidence here is incontrovertible – excessive salt consumption is linked to heart disease. In the context of Europe’s overall burden, and especially post-Covid-19, failing to translate that evidence into policy may not seem defensible anymore.”

Perk says he was particularly in favour of the frontof- pack nutritional labelling idea. “You have the traffic light initiative in England – we in Sweden thought this was absolutely fantastic but it was stopped mainly by the industry, we suspect, because they felt it was too difficult,” he says. “However, it’s really something we strongly recommend – we want simple, understandable labelling so people know what they are buying. The other thing is there’s a wide variety of adverts directed to children and young people, and there, we need legislation. We need very clear rules that we don’t sell things to kids that they definitely do not need.”

Perk feels that, generally speaking, voluntary initiatives are unlikely to work, and favours legislation over an approach of ‘asking nicely’. “Finland and Sweden both had large numbers of patients with cerebrovascular disease, and in both countries people used 12–14g of salt per day,” he says by way of example. “The Finns directly legislated the food industry and they were able to bring national salt consumption down to about 6g per person per day. They saw a clear decrease in the prevalence of stroke. In Sweden, we said to the industry please put a bit less salt in the food. They didn’t, and our stroke rates did not go down. Asking for consensus from the industry is not enough – you need laws.”

Salt consumption, Perk says, is the next big area that the ESC hopes to see some kind of progress. The evidence here is incontrovertible – excessive salt consumption is linked to heart disease. In the context of Europe’s overall burden, and especially in the post-Covid-19 era, failing to translate that evidence into policy may not seem defensible anymore.

“There’s also the problem we see with obesity – there is a really alarming increase in the number of overweight people around the world,” says Perk. “In the Nordic countries, this is becoming more of a class problem. We have a group of well-educated people who eat properly and don’t put on weight, and a smaller group who eat the wrong things, don’t move around, smoke and are going to be our patients in future. General information campaigns don’t really reach out to those who need them – they don’t understand or want to listen – so that’s why legal changes are probably the way to go to cover the whole population.”

He adds that, while the Covid-19 pandemic has exacerbated an already difficult situation, we have learned important lessons along the way.

“In Sweden, we haven’t had people demonstrating against the pandemic because the messaging is clear – they understand that this is serious and we can’t play around with it,” he says. “This is something we might learn from the pandemic. With issues like obesity, type 2 diabetes and heart disease, you need very convincing messaging – leaving people in no doubt whatsoever that this is serious.”

Covid-19, then, may help us better understand the importance of collective public health action and advocacy. The ESC’s action plan could make a real difference to a crisis that, while does not command headlines, is no less severe.