Take it to heart

Risk factors for cardiovascular disease, which causes around a third of all deaths globally, can be reduced through changes in diet. But the medical profession isn’t doing enough to address the nutritional challenges many people face. Ellys Earls speaks to Dr Tom Butler, a senior lecturer in Nutrition and Health at Edge Hill University and head of the British Association for Cardiovascular Prevention’s Diet Working Group, to find out what needs to change and where to start.

Dr Tom Butler has been fascinated by the link between nutrition and cardiovascular health since his undergraduate degree in human biology. His dissertation project looked at the effects of eating fat and sugar on the heart. He took this research further for his PhD, investigating what happens at the molecular level and how what you eat can regulate cell death and directly impact the disease process of conditions like hypertension.

It’s well documented that the risk factors for cardiovascular disease (CVD) can be reduced through changes in diet and physical activity. A diet rich in fruit, vegetables, olive oil and nuts is widely recognised in clinical guidelines as being important in both primary and secondary prevention of heart conditions. You might expect that this knowledge – combined with the increasing prevalence of CVD and the deaths associated with it – would have led to nutrition becoming an important part of its treatment and prevention. However, cases of CVD doubled from 271 million in 1990 to 523 million in 2019, while the number of deaths from cardiovascular conditions increased from 12.1 million to 18.6 million in the same time frame, equating to around a third of all deaths globally. It’s no surprise then that Butler believes there is still a long way to go.

It was only at his insistence that nutrition was made a mandatory module for the master’s degree in cardiovascular health and rehabilitation at the University of Chester, where until recently he was programme lead for BSc Nutrition and Dietetics. “People aren’t having heart attacks because of a lack of exercise. It’s a contributing factor, but it’s also because of exposure to poor lifestyle choices over the last 20, 30, 40 years and we don’t do much to address some of these nutritional lifestyle challenges that people face,” he says.

“These days, patients go through cardiac rehab and do the exercise, which is great for improving cardiac function, but there isn’t the focus on nutrition, which means people go back out of rehab into the environment they were in before and it’s almost like everything is conspiring against them. We need to put nutrition on the map.”

“People aren’t having heart attacks because of a lack of exercise. It’s a contributing factor, but it’s also because of exposure to poor lifestyle choices over the last 20, 30, 40 years and we don’t do much to address some of these nutritional lifestyle challenges that people face.”

The number of deaths from cardiovascular conditions increased to this figure from 12.1 million since 1990, equating to around a third of all deaths globally.

For this reason, Butler, who is now a senior lecturer in Nutrition and Health at Edge Hill University, leapt at the chance to head up the Diet Working Group at the British Association for Cardiovascular Prevention and Rehabilitation (BACPR). The flagship organisation supports practitioners working in cardiac rehab in the UK and works closely with its international equivalents as well as organisations such as the British Heart Foundation (BHF). “We want to improve the clarity of information that’s available to practitioners and patients about the link between cardiovascular health and nutrition,” Butler explains.

This year, Butler took up the position of Scientific Officer at the BACPR and is keen to drive this further. “There is a genuine interest from practitioners in what are the best nutritional approaches for patients, so it is really important that BACPR leads the way in supporting this,” he explains. The group’s first publication, which lays out the dietary patterns associated with improved cardiovascular outcomes and the potential issues encountered with their implementation, was written on the back of surveys with healthcare professionals. It is about the challenges they face explaining nutritional issues to patients and how they can do so more clearly.

One of the greatest difficulties they face is knowing which whole foods and dietary patterns to recommend when most research in the field focuses on single nutrients. “For example, a lot of research has been done looking at the effects of one of the main components of the Mediterranean diet, [which is] olive oil,” Butler says. “The main unsaturated fatty acid is oleic acid and we know we can give people oleic acid capsules and look at what happens in terms of their cholesterol, blood pressure and so on. But we don’t just eat individual nutrients. We don’t go to the supermarket and pick up oleic acid or calcium or zinc or phosphorus. We buy whole foods.”

Rather than focusing on individual nutrients, the BACPR’s paper advocates the cardioprotective diet, which is constructed around the traditional Mediterranean eating pattern. This means plenty of vegetables, fruits, nuts, legumes and unrefined cereals combined with modest amounts of fish and shellfish and fermented dairy products. As the most widely studied diet pattern in relation to cardiovascular health, multiple studies have suggested that the traditional Mediterranean diet is associated with lower mortality in both primary and secondary prevention of CVD.

However, the paper also stresses that there are other approaches that can be tried, including a healthy low-carb diet. “One of the things we were keen to capture was that the guidelines regarding CVD nutrition have historically been quite prescriptive, with the focus being on the Mediterranean diet. But if you look more broadly, different dietary approaches can be very effective for the right people,” Butler says.

“The key thing is to speak to the patient, present all the approaches and work with them to make the best decision for them as an individual. It’s important to give them education and information to empower them to take charge of their own treatment. If a doctor says you must eat x, y and z but ignores personal preferences and cultural or religious beliefs around food, the patient is not going to do it and they’re not going to come back and see you.”

For Butler, the key is to involve patients in this nutritional strategy rather than simply dictating to them what they should and shouldn’t eat. “Once you start involving patients in their care, outcomes tend to be better. It becomes more of a partnership,” he says. “This is more important than ever because the conditions patients are presenting with these days, such as CVD or type 2 diabetes, are much more complicated than they used to be and it takes a lot more discussion.”

Unsurprisingly, when a patient is a part of that process from the beginning, it tends to be more effective in the long-term.

The challenges of nutritional research

There’s a reason why most research in this field has looked at the impact on single nutrients on heart health. Namely, because it’s staggeringly difficult and expensive to research the link between dietary patterns and the most important cardiac outcomes, such as heart attacks or death. Firstly, budgetary limitations mean that it’s not always possible for study participants to buy the ingredients needed to follow these diets. The best-designed studies, therefore, tend to provide items like olive oil and nuts. But this adds up in cost, especially over the time frame to study hard outcomes.

“If you recruit people in their 20s or 30s for this, you have to follow them for 30 or 40 years to look at hard outcomes such as the development of heart attacks, which is going to cost a tonne of money,” Butler says. “Then other comorbidities come into play as we get older and older, making long term nutrition interventions all the more challenging.”

For this reason, researchers tend to rely on retrospective or prospective cohort studies. However, most of the information that is collected regarding food intake – irrespective of study type – is based on 24-hour recall, food diaries or food frequency questionnaires.

“It’s very easy for people to criticise these approaches because of the limitations of these particular ways of capturing diet information. But the alternative is we don’t collect this information and then we have really nothing to go on,” Butler says. “The challenge with nutrition is the field itself and how we can better design experiments to capture the outcomes we want to study.”

The importance of getting dietitians involved in CVD

Clearly, this is a challenge that won’t be solved overnight, but there is work that can be done in the shorter term to improve doctors’ and patients’ grasp of what we already know. One of the key reasons Butler was keen to lead the Diet Working Group was that he wants to get more dietitians involved in – and enthusiastic about – cardiovascular care.

“The challenge with cardiac rehab in general is [that] it’s often not seen as an important service, and this has been exacerbated by Covid,” he goes on to explain.

“In addition, from a dietetics point of view, cardiac rehab is often treated as a training ground for new dietitians. You would never see this in fields like mental health or eating disorders, which tend to be more protected specialist areas of practice.”

Butler can’t understand why there’s not more interest in CVD nutrition. “There’s a huge scope for dietitians to work in the prevention of CVD but also in secondary prevention with people who have had a cardiac event,” he says.

“This requires a substantial amount of nutritional research and a huge amount of clinical understanding. You can also build a rapport with patients and work with them to support them leading a healthy life. It’s a fantastic field,” Butler comments. Adding that, “Ultimately, CVD prevention is something that affects everyone, so there is massive scope for dietitians to make an impact.”

The good news is that he’s not the only one that thinks so.

Working with universities and other partner organisations, the Association for Nutrition (AFN) has published guidance for higher education institutions who want to include nutrition related competencies in their medical curriculums, the theory being that all medics who graduate should have a fundamental knowledge of nutrition.

“There’s a huge scope for dietitians to work in the prevention of CVD but also in secondary prevention with people who have had a cardiac event.”

For Butler, it seems that actually training more doctors, nurses and medical staff in the rudiments of nutrition could be something of a game changer.

Butler concludes, “if you can do something evidence-based with a patient at their initial appointment, that might be all that individual needs. It makes perfect sense at a time when the NHS is really struggling.” 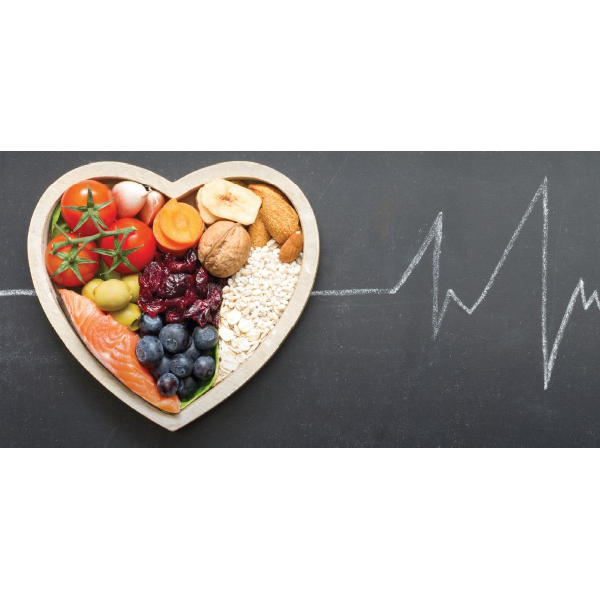 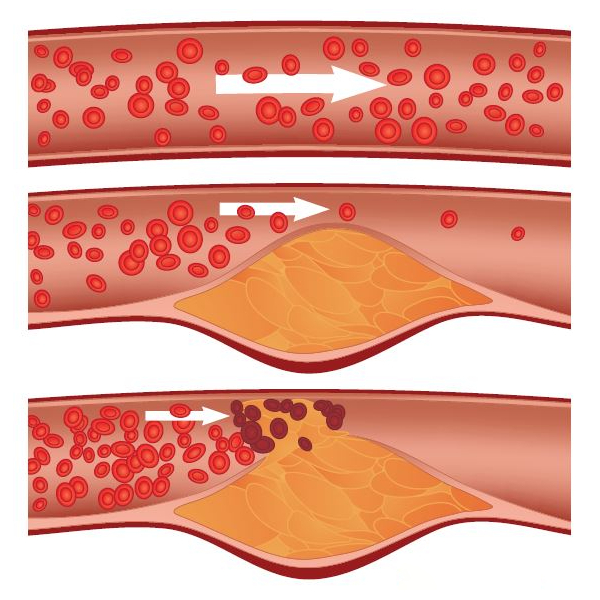 A healthy diet is critical to ensure cholesterol plaque does not build up in the arteries.
Post to: