With the UK Government’s Public Health Responsibility Deal salt pledge now in place, the commitment to salt reduction in the sector is set to change. Barbara Gallani of the Food and Drink Federation explains how.

Reducing the amount of salt in food continues to be a priority for food manufacturers and, for many years, members of the Food and Drink Federation (FDF) have worked to change some of the UK's best-loved brand's recipes to be lower in salt.

The effects of these changes has recently been realised in the data released by the Department of Health (DH) at the end of June, which showed a small, but significant downward trend over the last ten years, in people's salt intake.

Salt plays an important role in the taste, texture, shelf life and safety of foods. A successfully reformulated product must maintain all of these functions and remain acceptable to the consumer. If any of these functions are compromised, resulting in a negative impact on quality or flavour, consumers may respond by adding salt or switching to higher-salt products, thereby losing the intended health benefit.

While the commitment to salt reduction in the sector has remained largely unchanged since the development of the Food Standard Agency's salt reduction strategy in 2005, the political landscape and overall approach to improving public health is now radically different in 2012. The UK Government's Public Health Responsibility Deal is now in place, and one of the first pledges developed for its launch was a commitment by manufacturers and retailers to further reduce salt levels.

The pledge states that signatories "commit to the salt targets for the end of 2012 agreed by the Responsibility Deal, which collectively will deliver a further 15% reduction on 2010 targets. For some products, this will require acceptable technical solutions, which we are working to achieve. These targets will give a total salt reduction of nearly 1g per person, per day, compared with 2007 levels in food. We recognise that achieving the public health goal of consuming no more than 6g of salt per person, per day will necessitate action across the whole industry, government, NGOs and individuals".

“For many years, members of the Food and Drink Federation (FDF) have worked to change some of the UK’s best-loved brand’s recipes to be lower in salt.”

The wording of the pledge reflects that, following years of gradual reductions in salt levels, it is now very difficult to achieve further reductions with the techniques currently available for some foods. This means that new solutions are required to meet some of the Responsibility Deal 2012 targets. To help companies identify possible solutions, the FDF and the British Retail Consortium commissioned independent research by Leatherhead Food Research.

The research report was published in July and highlighted the techniques for salt reduction that are currently in use by the food industry and which may be relevant to those companies just starting out on salt-reduction programmes. These are: small-step reductions, an approach widely used, but which is reaching its limits as there will be a level of salt below which a product will no longer be appealing to consumers; increased use of spices in foods where salt is primarily used for flavouring; the use of mineral salts, in particular potassium chloride, although its use is limited due to its undesirable sensory attributes and DH guidance which discourages its use; the use of phosphates; and the use of taste enhancers such as MSG, amino acids and yeast products.

However, the main focus of the report and that of the food industry is on the potential means of reducing salt in the future. Salt-associated aromas, inhomogeneous salt distribution and adjustment of salt crystal size were identified as possible technological solutions, while ingredients for salt reduction are based on mineral salts, flavour enhancers, products which enhance umami or combinations of these ingredients together. A number of ongoing research projects were also highlighted demonstrating that this is a very active field.

The team at Leatherhead also uncovered some potential barriers to progress. Their research highlighted the lack of clarity facing ingredients manufacturers around the need to perform shelf life and/or microbiological challenge trials to establish the safety and stability of a new product formulation. Leatherhead found that in some instances ingredients producers had performed shelf life trials on the individual ingredients but not on food products containing them. One of the main recommendations arising from the report was that industry bodies and the Food Standards Agency work together to produce simple guidance on the minimum food safety requirements that ingredients manufacturers should meet prior to marketing new products.

Another obstacle facing manufacturers looking to reduce salt is the current DH advice to avoid using potassium-based solutions, as no significant modelling has been done to date to look at the potential health implications for certain sub-groups of the population of increased potassium intakes.

The report also emphasised that ingredients based on restructured salt crystal size might have to go through Novel Foods Regulations approval at EU level if they are created through novel processes, for example using nanotechnologies, which would mean that it could be years before they can be used in food products. So despite the commitment by manufacturers and retailers to reduce salt in their foods wherever possible, the limited solutions identified in the report mean that, in the future, salt reduction will likely be achieved through small changes to individual products rather than dramatic reductions across entire ranges.

“Through the Responsibility Deal salt pledge, the government’s focus is on ensuring more companies work towards the 2012 targets.”

Through the Responsibility Deal salt pledge, the government's focus is on ensuring more companies work towards the 2012 targets and considering how to make further progress to reduce the population's salt intake to 6g a day. It is likely that efforts will continue to centre on further gradual reformulation of manufactured products although, as highlighted by the Leatherhead research project, for some products new solutions will have to be found.

In addition to further reformulation by the manufacturers and retailers that have been successfully reducing salt in their products for many years, there is a need to broaden engagement in the Responsibility Deal salt pledge and encourage more companies to start on the salt reduction journey. This may be facilitated through the sharing of best practice with small and medium-sized enterprises (SMEs) by those businesses that have had success with their own reformulation programmes.

Greater progress on salt reduction could be achieved by the catering sector as many businesses will be embarking on salt-reduction programmes much later than the manufacturing and retail sectors and so they have the opportunity to make use of the lessons learned by others. Achievements could be made through providing nutrition training to chefs to ensure that they are aware of foods and ingredients that are high in salt, that they know how to reduce the levels of salt in their dishes and that they can develop menus that are lower in salt.

Activities to encourage sustained changes in consumer behaviour to add less salt during cooking and at the table, and to increase consumer awareness about choosing products lower in salt, will also be an important element in the government's approach to continue reducing the population's intake of salt towards the target of 6g a day. 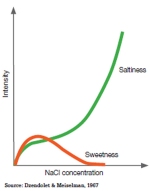 The public health goal is to consume no more than 6g of salt a day.

Salt intensity vs time for salt crystals of differing sizes. 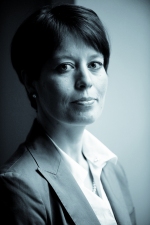 Barbara Gallani is director of the Food Safety and Science Division of the Food and Drink Federation (FDF).
Post to: