The Moro orange has been found to contain active compounds that may control fat accumulation, leading Bionap to produce MOROSIL, a Moro extract designed to control weight naturally. The company explains how the extract works.

According to the World Health Organization (WHO), in 2014, 39% of adults aged 18 years and over were overweight and 13% were obese, while 41 million children under the age of five were overweight or obese. Worldwide obesity has more than doubled since 1980.

Obesity is considered a major risk factor for several chronic diseases, such as hyperlipidemia, heart disease and type-2 diabetes. Other comorbidities include gallbladder disease, fatty liver, sleep apnoea and osteoarthritis, plus reduced quality of life and life expectancy. Fortunately, obesity is largely preventable and, according to the National Institute for Health and Care Excellence (NICE), most people who need to take action can gain health benefits from losing even a small amount – about 5% – of their weight.

Choosing a healthier lifestyle and better nutrition (such as not smoking, regular exercise, reducing processed foods, and increasing fruit and vegetable intake) is recommended by the main worldwide health organisations as the first strategy in weight control and management. Moreover, several research groups have recently discovered that eating fruits and vegetables can help to control weight gain due not only to the reduction of daily calorific intake but also to the action of natural compounds contained in them.

Over the past few years, scientific studies have proved the beneficial effect that flavonoids and polyphenolic compounds – widely distributed in fruits and vegetables – have on weight control. In-vivo and in-vitro studies demonstrated that flavonoids are able to affect lipid metabolism via specific molecular actions. For example, anthocyanins were shown to ameliorate adipocyte metabolism through regulation of gene expression.

Of all the plants and fruits containing flavonoid compounds, red or blood oranges (Citrus sinesis (L) Osbeck) have been recently evaluated for their beneficial effects. In particular, several in-vitro and in-vivo studies have investigated the health-related properties of red orange intake (especially Moro oranges) with regard to weight management.

Among Italian blood oranges (Tarocco, Sanguinello and Moro), the Moro variety is the most brightly coloured, with a deep red flesh. The typical red colouration of the fruit is attributed to the presence of pigmented compounds called anthocyanins, not usually contained in blond sweet oranges and other citrus fruits. The blood orange is an ancient orange variety that probably originated in South-East Asia and spread widely throughout the Mediterranean basin during the era of Arab dominance in the ninth century.

Today, a small part of eastern Sicily is considered a special and optimal area for the growth and production of the Moro orange; large diurnal temperature fluctuations (hot days and cold nights) are identified as the main cause of the intense red pigmentation. Thanks to the typical climatic condition of these regions, the Moro flesh ranges from orange-veined with ruby colouration to vermilion and, sometimes, nearly black.

MOROSIL is a solid extract produced by Bionap from Sicilian Moro orange juice. The manufacturing process for MOROSIL preserves the natural composition of active compounds in the orange juice, mainly expressed by anthocyanins, hydroxycinnamic acids, flavone glycosides and ascorbic acid.

An Italian research group observed the beneficial effect of Moro orange juice intake for the first time in 2009 (see figure 1, page 37). The experimental study was carried out on mice, which were fed a high-fat diet to induce weight gain. One group of mice was given Moro juice and the other was not.

Researchers found that in the mice that drank the orange juice, a strong reduction in weight gain was recorded when compared with the control group, which was fed only the high-fat diet. Intake of Moro juice – but not blond orange (Navelina) juice – counteracted the effect of a high-fat diet on adipose tissue, leading to a marked reduction in adipocyte cell size and lipid accumulation (a 25–50% decrease in abdominal/inguinal fat mass).

Following these results, another research group evaluated the effect of Moro juice intake on mice fed on a high-fat diet over 12 weeks (see figure 2, above). Liver morphology, gene expression of lipid transcription factors and metabolic enzymes were investigated. The data obtained showed that Moro juice administration was able not only to limit weight gain but also to decrease serum triglycerides and total cholesterol, and improve liver steatosis – a condition caused by obesity.

In these studies, researchers found that administration of only the natural pigment cyanidin-3-glucoside did not produce the same beneficial effect on fat accumulation as Moro juice. These findings suggest that Moro juice’s anti-obesity effect cannot be explained by anthocyanins alone. The other components contained in Moro orange act synergistically to inhibit fat accumulation.

"Intake of Moro juice counteracted the effect of a high-fat diet on adipose tissue."

These interesting pre-clinical results were confirmed by a recent human study on 60 subjects. In the randomised, double-blind and placebo-control clinical trial published in Natural Product Research, it was proven that Moro orange extract supplementation (MOROSIL dosage of 400mg/day) can counteract fat accumulation and weight gain in the body. Results obtained in the study showed that Moro extract intake induced a significant reduction in body weight, BMI, and waist and hip circumference, in comparison with the untreated group, without any change of daily lifestyle.

Mean losses of 3.08±0.24kg in body weight and 1.11±0.09kg/m² in BMI value were observed after 12 weeks, with a reduction in waist and hip circumference of about 7.08 and 5.96cm respectively. Moreover, a significant reduction in BMI was observed in volunteers treated with Moro juice extract after only four weeks of treatment.

In conclusion, the scientific information and results suggest that Moro juice contains active compounds that are able to control weight gain and fat accumulation. Consequently, the Moro juice extract MOROSIL can be considered a natural ingredient useful in the management and prevention of obesity. 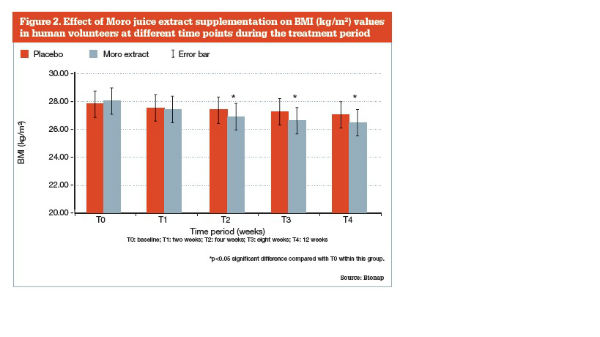 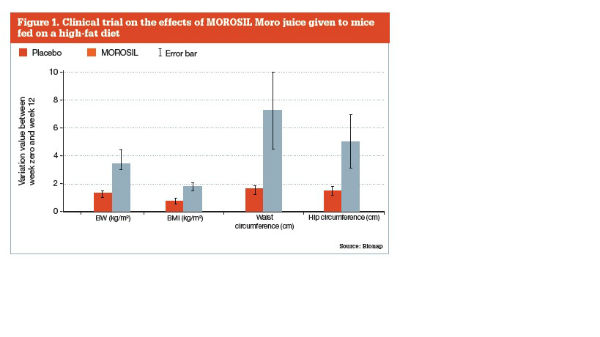