Inside the power plant

US-based non-profit the Good Food Institute is at the forefront of efforts to turn the public at large on to sustainable, plant-based alternatives to meat. Ingredients Insight talks to CEO Bruce Friedrich about challenging preconceptions, engaging with the mainstream food industry, and why 2018 was a landmark year for sustainable protein.

As CEO of the Good Food Institute (GFI), Bruce Friedrich is one of the most influential advocates of plant-based foods. Since 2015, when the former head of campaigns at PETA founded the institute with $540,000 from Mercy for Animals, (with support from former GE CEO Jack Welch and his wife), the GFI has become a leading voice in the effort to drive the public away from animal meat to a more sustainable alternative.

The institute’s 65 employees work across a range of departments, from lobbying and scientific research to corporate engagement. According to Friedrich, the GFI’s efforts have ramped up recently as the market for plant-based foods continue to grow.

Indeed, Friedrich describes 2018 as a landmark year for sustainable protein. Sales of meat alternatives rose by 22% last year, and 18% the year before, according to Euromonitor International.

That trend reflects Friedrich’s belief that trying to shame people into quitting meat and turning to vegetarianism or veganism was a strategy doomed from the start. “We need to change the meat, because we aren’t going to change human nature,” he recently said to The New York Times. Instead, the GFI now works with willing partners to invest in the technology and science to develop plant-based products for a mass market.

So far, plant-based ‘meat’ companies have had the most success, but the Good Food Institute is also putting significant resources into helping companies that want to grow meat cells in labs.

In partnership with its collaborators, which include a range of university research departments and innovative start-ups, the institute remains committed to its mission to “Foster innovation, mentor startups, accelerate the science of sustainable protein, forge partnerships with big food corporations, and advocate for a level playing field through work in Congress and with regulatory agencies.”

In practice, that means offering support to innovative companies, helping them with marketing, design, legal, business, media, and other support to a select number of early-stage companies producing clean and plant-based products. It also means underwriting (via grants) research into plant-based foods across the world. So far that has seen the GFI fund work in universities and institutes in the US and Europe as well as Israel and China.

So, how would Friedrich characterise the past 12 months in terms of the progress made in promoting the use of plant foods?

“It is not progress GFI has made specifically, but progress in promoting plant-based foods has been truly stunning in the past year,” he says.

Plant-based foods are clearly the hot sector of the food industry today and only getting hotter.

“What else can you say about a market growing at 23% (plant-based ‘meats’) and often limited only by the ability to produce plant-based ‘meat’ products quickly enough?” he says. “Beyond Meat and Impossible are, basically, selling all they can produce – if they could produce more, they could sell more.”

Given all that, Friedrich admits it is hard to choose a highlight from the recent successes.

“Our corporate engagement team has been working with so many companies and institutions that our monthly reports are filled with accomplishments that could be a highlight for an entire year,” he says.

“But I think restaurants are often where the public first comes into contact with new food items, so we do our best to encourage the biggest chains to add and feature plant-based entrees. A number of restaurants made big strides, jumping up in our Good Food Scorecard.

“Who would have expected that plant-based burgers would be huge sellers at White Castle, TGI Fridays, A&W and Carl Jr’s? The stats of year-overyear growth at the retail level are also amazing.”

It is not all plain sailing, of course. The plant-based movement faces headwinds from a number of directions. The meat industry is a formidable presence that isn’t going anywhere, meaning producers of plant-based foods face Friedrich an uphill struggle to market and position their products in a sector where ‘real’ food dominates.

Friedrich cites recent cases of beef and farming industry groups bringing pressure to bear in order to persuade legislators in more than a dozen states to introduce laws that would make it illegal to use the word ‘meat’ to describe burgers and sausages that are created from plant-based ingredients or are grown in labs.

“We face the ongoing problem of the general move by some to try to suspend the First Amendment and stifle innovation,” Friedrich reflects, adding that much of the institute’s advocacy work is focused on challenging preconceptions not just about animal meat (though that does form a part of its missions) but also on persuading the industry that there is a whole new raft of customers – and hence money to be made – out there in search of a healthier, more sustainable diet. So is the industry waking up to the new opportunities?

“There is no doubt about that – just look at the statistics in our Market Research and Restaurant Scorecard,” Friedrich says. “Both Tyson (the largest meat producer in the US) and Nestle (the largest food company in the world) have both announced they are getting involved the plant-based ‘meat’ business too. This comes after Tyson invested in plant-based-meat pioneer Beyond Meat.”

Friedrich sees the increased enthusiasm among ‘traditional’ food producers to invest in alternatives as a real benefit and something that should be encouraged in the same way as the fossil fuel energy sector is praised for investing in renewables.

“It was an open question of how the meat industry would react to the rise of plant-based ‘meat’ [and clean meat],” he says. “And although some elements are fighting this trend, overall, the food industry is embracing this move to producing ‘meat’ and dairy directly from plants.”

“When the wagon of change comes,” says the old cowboy (now embracing yoga), “you need to ride along with it.”

17%
Growth in sales of plant-based alternatives in 2018.
GFI

“It was only a few years ago that plant-based milks were a negligible portion of the market, relegated to a dusty corner of the local Co-op. Now they are 13% of the market and still growing. Plantbased ‘meats’ are well positioned to follow this same trajectory. Similarly, plant-based cheeses and yogurts are growing quickly as well.”

79%
Proportion of retail food stores selling plant-based ‘meat’ in the US.
GFI

And there’s little sign of the innovation running out of steam. Recent advancements have highlighted the progress being made by some of the sector’s most forward-thinking companies.

Take JUST, a San Francisco-based manufacturer of plant-based alternatives, which recently announced it had successfully produced a range of chicken products, lab grown from the cells of a chicken feather. And it plans to go beyond poultry into beef, having recently partnered with a wagyu beef producer, the Japanese company Toriyama, to create a lab-grown wagyu beef, but there’s no release date for that just yet.

Work with the enemy

The GFI’s work has seen it work with and endorse a diverse – and surprising – range of organisations. Far from treating legacy food retailers and producers as the enemy, Friedrich is among a newer wave of activists who believe that engaging with the bigger players – and not castigating them as pariahs – is far more likely to lead to greater progress.

Indeed, his time at PETA saw Freidrich graduate from demonstrating outside McDonald’s restaurants (with fake Unhappy Meals, filled with bloodied plastic chickens) to negotiating with the company and praising it when it improved the living conditions of its egg-laying hens.

He is not alone in taking a more pragmatic, less dogmatic approach. Pat Brown of Impossible Foods spoke for many when he recently said, “All the education and all the awareness of the problem, and concern about the problem, doesn’t solve the problem,” he said to The New York Times. “We just need to deliver the same value to consumers, but use better technology to produce it.”

Friedrich’s is among many who are convinced that the direction of travel is slowly but decisively moving away from meat.

“People have little loyalty to meat per se,” Paul Graham, Silicon Valley investor and founder of Y Combinator, recently tweeted. “If you made something that was cheaper and tasted better, most carnivores would switch. Once that shift started, social pressure against eating meat would grow rapidly. It would seem, and in fact would be, perverse.

“Predictions about the future often turn out to be false, but I’m going to risk predicting a rapid switch away from meat at some point,” Graham said. “It is rocket-science hard, but no harder, and there is a huge amount of money to be made. Ergo it will happen.”

With that in mind, it is not surprising that Friedrich is optimistic that the gains made so far will continue into the next few years, where environmental, social and public health pressures will all combine to threaten the hegemony of ‘real’ meat.

And while the meat industry remains a behemoth in terms of its economic and lobbying power – particularly in the US – it is increasingly clear that the plant-based sector is where the real energy lies. 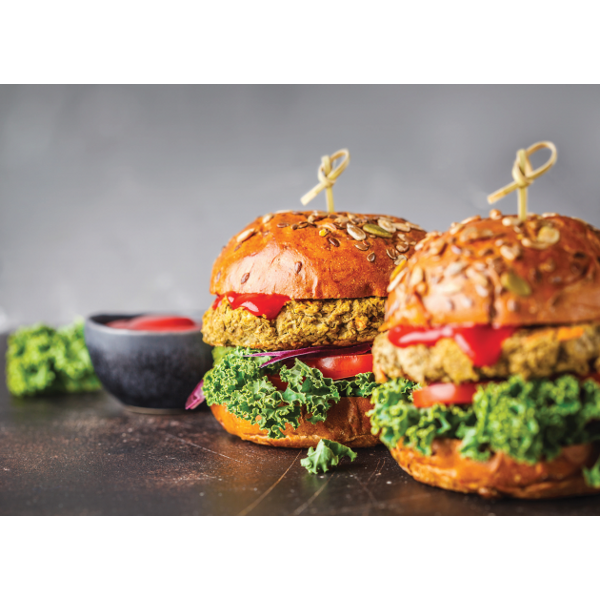 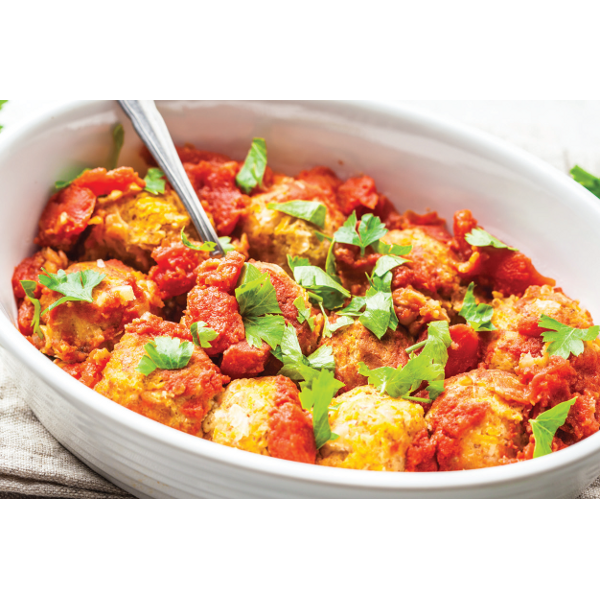 ‘Meatballs’ can be plant-based, satisfying a demand for alternatives to classic dishes. 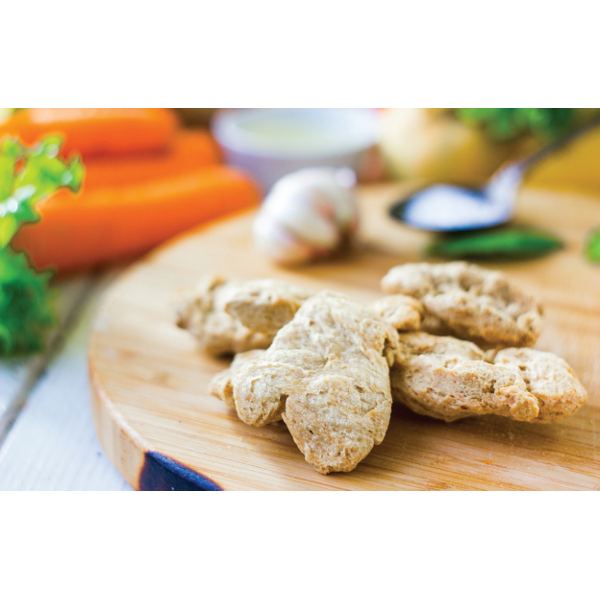 Soybean ‘meat’ has become a popular alternative – though chicken products have also received lab-based developments in San Francisco.
Post to: