If the caps fit

Consumer clamour for healthier, naturally sourced ingredients has reached fever pitch, manifesting itself in new demands for meat analogues and campaigns against added sugar. Now, a start-up in Colorado is promising that its vegan additives can help food manufacturers respond to both trends. Greg Noone talks to Alan Hahn, CEO of MycoTechnology, about the power of the humble mushroom and the future of the human diet.

From the outset, meat analogues did not seem to deserve a popular noun of their own, so strong was the sense that what the consumer was being served was inferior to the meat it was imitating. The earliest reference to tofu, for example, found in a Chinese history book in 965 AD, refers to the foodstuff as ‘mock lamb chomps’ or, more enticingly, ‘the vice mayor’s mutton’.

This theme only grew stronger as meat consumption rose, first in the industrialised West and then around the world. One of the earliest vegan cookbooks, Almeda Lambert’s Guide to Nut Cookery, published in 1899, included recipes for ‘Mock turkey’, ‘Mock salmon’ and more unusually, ‘Mock oyster patties’. By the millennium, the development of soy and mushroom-based meat alternatives led to vegetarian versions for almost every animal under the sun, including FriChick for fried chicken, Facon for bacon, and Tofurky for – well, you get it.

The willingness of food producers to market subliminal nostalgia for meat to those who avoid it is understandable, given its usefulness as a source of protein and unique flavours in the human diet. That connection has strengthened in recent years. Appreciation for natural, more sustainable ingredients has grown at the same time as scientists warn of world agriculture’s contribution – particularly cattle farmers – to global emissions having reached unsustainable levels. So too has a disdain of sugar, linked to everything from obesity to heart disease and tooth decay.

Food manufacturers have pivoted accordingly. Just ask Alan Hahn. His start-up, MycoTechnology, produces food additives made from mushrooms. Its two leading products – PureTaste, a vegetable protein made from fermented shiitake mushrooms, and ClearTaste, an organic bitter blocker that lessens the need to pour an unseemly amount of sugar into certain products to mask the otherwise unpalatable flavours – have proved so popular that the company opened a 8,000m2 production facility in Aurora, Colorado, in 2017. Its success has piqued the interest of food industry giants, chief among them Kellogg’s and Tyson Foods, which contributed significantly towards the $30 million that MycoTechnology raised in its latest funding round in January.

Hahn is philosophical about the hype surrounding the company. He is well aware that MycoTechnology is sitting on the crest of a new wave of innovation in the ingredients space, the size of which is still hard to fathom. “We’ve got this fermentation platform,” he muses. “How does that fit into the overall trends and macro changes in the food space, from everything from protein for meat analogues to beta blockers for sugar and salt reduction? How does it fit in there from a health and nutrition point of view? [That’s] how I look at it.”

Mushrooms are everywhere. Found on every continent, including Antarctica, mushrooms are not plants – despite them being classified by the US Food and Drug Administration (FDA) as such – but more closely related to the animal kingdom. Mushrooms are also, strictly speaking, not things themselves, but part of something – specifically, the reproductive organ of a mycelium, a supportive fungal colony creaking beneath the soil. The next time a grey cap is impaled on a fork next to some eggs and bacon, be well aware that it was once the prodigious, virile appendage of a much more complicated – and anatomically bereft – organism.

Mushrooms have been a hallmark of both vegetarian and carnivorous cuisine for centuries. In recent years, consumer demand for naturally sourced proteins has grown markedly. “What’s happened is, as people want more protein in their diet and fewer carbohydrates, protein has been getting in all kinds of snacks, chips and baked goods,” Hahn explains. MycoTechnology responded with its vegetable protein, PureTaste.

$30 million
Funding raised for MycoTechnology, with contributors including Kellogg’s and Tyson Foods.
MycoTechnology

The additive is derived from the mycelium of shiitake mushrooms, which is subjected to a fermentation process. “We have mushrooms, or the filamentus fungi, the roots system of the mushrooms, and that goes into a stainless steel vat,” he says. “It ferments, and then it looks like a goldencoloured beer at the end of it.”

“When we’re going to make a new ingredient, we go to our library of mushrooms and do a ‘Bake Off’, so to speak.”

Other plant-based protein feedstock is added, before the resulting mixture is spray-dried into a powder. The whole process is highly adaptable, with MycoTechnology constantly experimenting with the recipe’s inputs. “When we’re going to make a new ingredient, we go to our library of mushrooms and do a ‘Bake Off’, so to speak, of which mushroom will work best for certain applications,” Hahn explains. His colleagues have a library of over 50 fungi to choose from, all of which are familiar within the wider food chain.

Hahn sees huge potential for PureTaste in supplementing meat analogues. “The successful IPO of Beyond Meat has caused considerable change in the food industry for companies to respond to [its] success,” he says. Hahn is confident that PureTaste has the edge over similar vegan protein sources.

“Of the nine essential amino acids, it has all nine of those in the right percentages,” Hahn explains, adding that PureTaste’s PDCAAS, or ‘protein digestibility corrected amino acid score’, is one – the same score, he points out, as meat. The fermentation process that the shiittake mushrooms undergo also removes the bad taste and aroma that is typically associated with pea proteins.

“We’re able to remove all that,” says Hahn. Therefore, when preparing a meat analogue using PureTaste, “you’re not trying to cover up bad taste and bad aromas. You don’t need to add a bunch of salt and fat into the [product] to achieve the desired pacing results that you want.”

“What’s attracting consumers is this magical thing where plants can be made to look like ground beef – you can cook it, and it looks like cooked ground beef. That’s fascinating to people.”

With the roll-out of its bitter blocker ClearTaste, MycoTechnology is taking aim at another controversial ingredient: sugar. “Think of foods that have bitterness, sourness, astringency, some kind of off-note, sometimes earthy notes, that aren’t desirable,” explains Hahn. “If you’re a food company, and you’re using those ingredients, you have to figure out a way to make it palatable and enjoyable for someone to eat. So, what are you going to do?”

The answer is usually to pour sugar into it. Chocolate is a prime example. “It’s naturally bitter, so you have to add sugar to it to reduce that,” says Hahn, a process called ‘masking’. “Now, if you use our product, ClearTaste, in that same chocolate, you can lower the bitterness in the chocolate with our bitter blocker. Your perception of bitterness is reduced, [and therefore] the amount of sugar you need to put in there to make it sweet is greatly reduced – typically, cut in half.”

With MycoTechnology’s innovations in protein development and bitter blocking piquing investor interest, why is the company proving so popular? “It’s funny, I was just thinking about this the other day,” says Hahn, who remembers first hearing about vegetarianism in the 1960s. Back then, it was strictly a fringe concern. “Now fast-forward 50 years later… this is no longer a little niche fad. It’s becoming the way people want to eat.”

Brands like Beyond Meat and Impossible Burger have shown that meat substitutes do not need to be pale imitations of the real thing. “What’s happening now is that food science is getting so much better,” says Hahn. “What’s attracting consumers is this magical thing where plants can be made to look like ground beef – you can cook it, and it looks like cooked ground beef. That’s fascinating to people. Now you’ve got – optically – something that’s familiar to them.”

Hahn predicts that, eventually, half of all diets will be plant-based. His personal attitude towards meat, however, remains fairly conventional. “I grew up in a family that was fairly meat-oriented,” he says. “I had two other brothers, and you know, we were meat, meat, meat.”

Hahn remembers eating it for almost every meal. Now, however, his attitude has changed – not radically, but enough to put him on the same wavelength as an increasing number of consumers concerned about the impact meat is having on their health and the climate. “I really started opening up to the idea of replacing a meal with non-meat products,” says Hahn. “I definitely like how I feel when I’m not consuming as much meat. But I’m definitely a flexitarian. I will eat meat, I will eat a vegetarian meal.”

The entrepreneur is excited at the health possibilities of new food possibilities. “We’ve developed a non-dairy milk, a non-dairy icecream, a non-dairy yogurt,” says Hahn. For them to succeed in the wider marketplace, however, he remains adamant that one quality has to shine through – above natural origin, above social responsibility.

Burgers that go beyond

Founded in 2009, the Los Angeles-based Beyond Meat produces imitation meat products made from recipes that include coconut oil, pea, rice and mung protein, and potato starch, among other ingredients. The signature ‘bleed’ achieved by its burger patties is achieved through the inclusion of beet juice extract. In July 2019, Beyond Meat issued an initial public offering that valued the company at $3.8 billion. 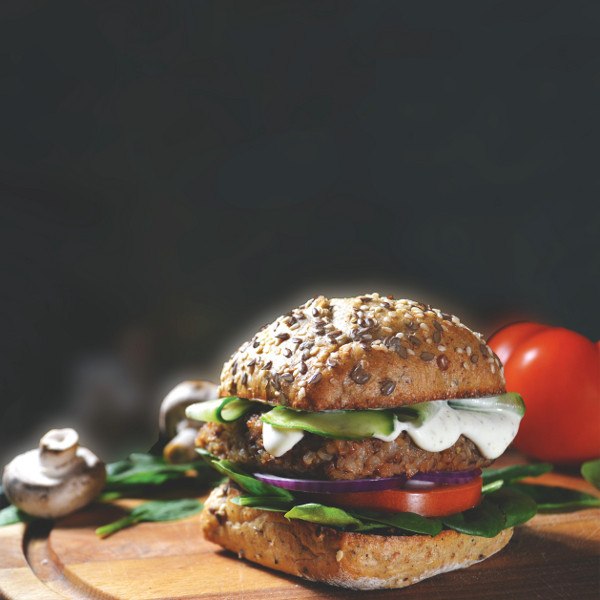 MycoTechnology has a library of over 50 fungi to choose from. 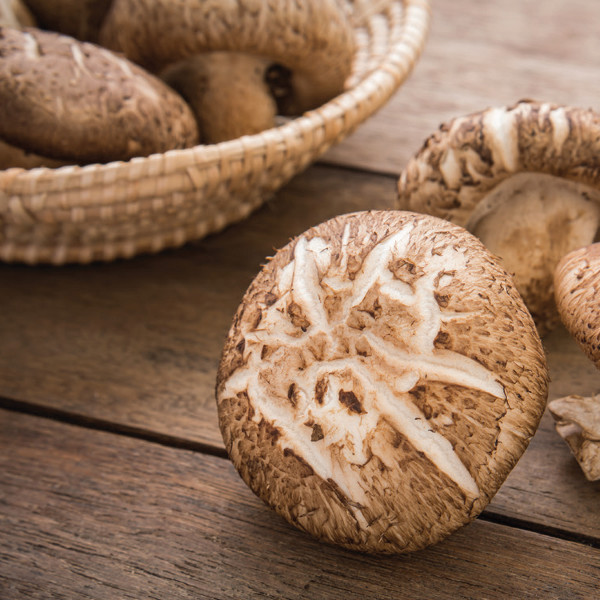