Nutritional supplements have been central to athletes’ performance for years, though stars have traditionally focused more on their physical strength. But with the links between physical and cognitive health becoming even clearer, that’s changing. Andrea Valentino talks to Luca Bucchini, vice-chair of the European Specialist Sport Nutrition Alliance, about the latest cognitive supplements, regulatory and communication challenges, and how the industry might develop in future.

How did they do it? From Roger Bannister’s four-minute mile to Pheidippides’ 26-mile dash to Athens, the endurance of our sporting processors almost beggar’s belief – especially when you remember how little support they had. Apart from the shoes on their feet and their own will to victory, they didn’t have trainers or coaches or the latest aerodynamic tracksuits. Nor, of course, did they have anything in the way of supplements to boost their performance. Whatever they did, they did totally alone.

How things have changed. According to Grand View Research, the global sports nutrition market is expected to grow by 8.7% from 2020 to 2027 – and it’s already worth over $15bn. News from developing countries, such as China and Brazil, is even more dramatic. In India, the Ministry of Food Processing Industries has reported growth of over 50%, boosted in part by exploding online sales. And then there’s professional sport itself. Although officials keep an increasingly close eye on what athletes can and can’t consume, Usain Bolt and other top performers regularly imbibe a cocktail of nearly a dozen supplements, and some even use dangerous unverified additives.

“How we think – if we’re tired or alert, ready to go or in need of a nap – can have a deep effect on whether an athlete reaches the podium. No wonder, then, that companies the world over are busy thinking of ways to make us more mentally agile, with consequences far beyond the football field or racetrack.”

Amid this general increase, however, there is one notable gap. Though there’s plenty to boost physical performance, cognitive abilities are often left by the wayside. To a certain extent, this is understandable. We tend to think about sport, especially events like running, as purely physical feats of prowess. Yet the scientists tell us that how we think – if we’re tired or alert, ready to go or in need of a nap – can have a deep effect on whether an athlete reaches the podium. No wonder, then, that companies the world over are busy thinking of ways to make us more mentally agile, with consequences far beyond the football field or racetrack.

If anyone knows about sports nutrition, it’s Luca Bucchini. A biologist by training, he’s worked in food science and regulation for the last 20 years. If that weren’t enough, he also manages a consulting company, and acts as the vice-chair of the European Specialist Sport Nutrition Alliance (ESSNA). To put it another way, Bucchini has seen a lot – not least how this industry used to be, which essentially relegated the mind to the body every time. But as the Italian hastens to add, that is changing.

“I think we are moving towards a more holistic approach to an athlete’s performance and career,” Bucchini says. If an athlete has always had to be in perfect health – with a strong immune system and healthy joints – he explains that sports scientists are increasingly focusing on the “psychological and cognitive side of sports” as well. This is certainly borne out if you look at the science. According to one 2018 study by Simone Montuori in Neural Plasticity, for instance, mental training can help athletes improve their capacity to perform motor skills specific to their chosen sport or event.

Industry is moving in a similar direction so Brightseed, a start-up based in San Francisco, recently raised $27m for research into the cognitive benefits of natural products, while factories are popping up everywhere from Bangalore to Shanghai. In Europe, meanwhile, Bucchini and his colleagues at ESSNA show similar enthusiasm.

“Personally, as an ESSNA officer, I think that our industry has a stake in developing a more holistic approach to athletes and physically active people, to improve health, cognition and well-being in the short and long term – and has the capability to help deliver,” he says.

All the same, all the optimism in the world can’t hide that, until recently, cognitive health supplements have struggled to make headway. Perhaps the most fundamental problem is regulation. With so many overlapping jurisdictions, some unscrupulous manufacturers make dubious assertions about their products, damaging the reputation of the industry as a whole. As work by the Global Council on Brain Health recently put it about certain omega-3 supplements, “The weight of the existing evidence does not sufficiently demonstrate benefit.” Ironically, the very size of the new cognition supplements market has sometimes been its downfall, with the US Food and Drug Administration unable to properly verify claims.

As any fan will tell you, college American football has a reputation for toughness, every player desperate to make the draft and secure a coveted place in the NFL. It probably came as a surprise to some, then, that in January 2017 three Division One players were taken seriously ill. One of the players complained of sore arms and was promptly diagnosed with a condition called rhabdomyolysis. Others, for their part, said they had discoloured urine. Though this trio was unfortunate, at least doctors could diagnose their conditions in time. According to one prominent US sports journalist, 21 college footballers have died of similar illnesses since 2000.

So what, you might ask? Well, what’s remarkable is that these young men weren’t hospitalised from hits they took on the field of play – but rather, from sheer exhaustion, a condition known to sportspeople themselves as overtraining. “There are different types of stress, and other negative aspects, including loss of interest and of enjoyment, fatigue, insomnia and agitation,” explains Bucchini. “That would negatively impact cognition in competition. Therefore, scientific developments and innovation in this area are very important.”

Just as well, then, that new treatments are coming down the pipeline to help. Probably one of the most interesting, in fact, involves American football players. Known as vinpocetine, and derived from the periwinkle plant, it’s been used to increase the reaction speeds of NFL players, as well as potentially boost blood flow. Another solution, made from isolating an alkaloid found in a Chinese herb, blocks enzymes that could hurt cognitive functions. And as with so many other areas, cannabinoids are being investigated as well. For example, Maryland’s Brain Health Education and Research Institute suggests that hemp and CBD can make us quicker-witted and help with traumatic brain injuries to boot. Even cocoa and caffeine are being heralded as super supplements – and given what we all know about drinking coffee to stay awake and alert, this doesn’t seem like an unreasonable claim.

To put it another way, there is scientific backing to support some of these claims. Even so, Bucchini is eager to emphasise that though several substances “are of interest”, that doesn’t mean they’re definitely helpful. “There is a lot of excitement around some substances, which is welcome, as long as they are actually helpful and safe to use for athletes,” he explains. “We also wish to see companies investing in research more clearly rewarded for their effort.” Among other things, Bucchini notes that because it hasn’t been approved by the EU, vinpocetine can’t yet be sold on the continent.

Not that the situation is hopeless. The European Commission, for its part, is looking to harmonise EU and national legislation on cognitive supplements, ultimately making it easier to separate genuinely transformative treatments from the snake oil, while India and Australia are making similar noises. Good news, says Bucchini, though he’s careful to add that these legislative changes must dovetail with better explanations about what these pills and capsules can do. “Communication is more of a challenge given the rules that we have in Europe and in the UK, which, though well-intentioned in principle, do not seem to support innovation.”

Run for your money

Whatever the challenges of getting these cognitive boosters to the athletes who need them, there can be little doubt that they’re here to stay. That’s been clear enough even over the last few months. Though Covid-19 has ruined the year’s sporting calendar – with Euro 2020 and the Tokyo Olympics just two of the landmark events to suffer – sports nutrition companies have bounced back well, fundraising for medical supplies and encouraging online races. And given how fierce sporting competition is generally, with records constantly being smashed by superhuman athletes, there’s little reason to doubt that sportspeople won’t go right back to getting all the help they can when play resumes.

“With new studies linking mental strength to physical prowess appearing all the time, dovetailing too with our increased sensitivity to dementia and other cognitive impairments, it seems likely that supplements to help our brains will just grow and grow.”

That’s arguably doubly true in the realm of cognitive supplements, Bucchini believes. With new studies linking mental strength to physical prowess appearing all the time, dovetailing too with our increased sensitivity to dementia and other cognitive impairments, it seems likely that supplements to help our brains will just grow and grow. Obviously, sportspeople themselves are the main targets here, but given how fast many populations are ageing, their benefits will likely be enjoyed by regular people too. A pity they’re arriving too late for our illustrious predecessors – even if that would have made Chariots of Fire a far less exciting movie.

The value of the sports nutrition industry in 2020.

The compound annual growth rate of the sports nutrition industry from 2020 to 2025.
Grand View Research

The amount raised by a US start-up to research the cognitive benefits of natural products.
Brightseed 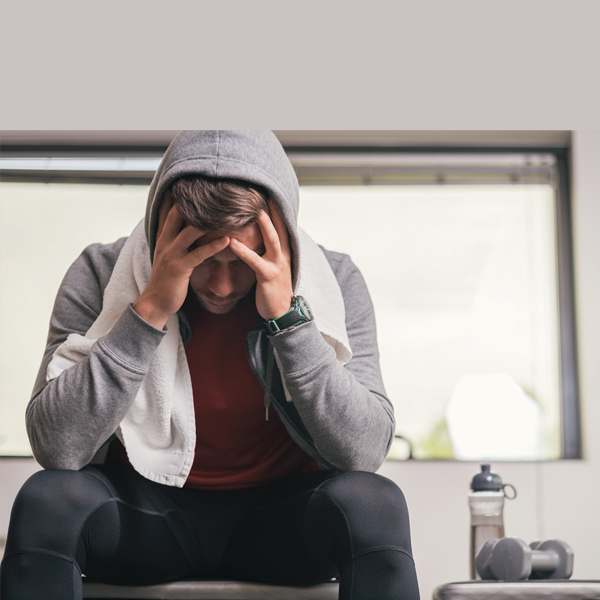 Overtraining is a dangerous aspect of professional sport, but is something that can be alleviated by intelligent nutrition. 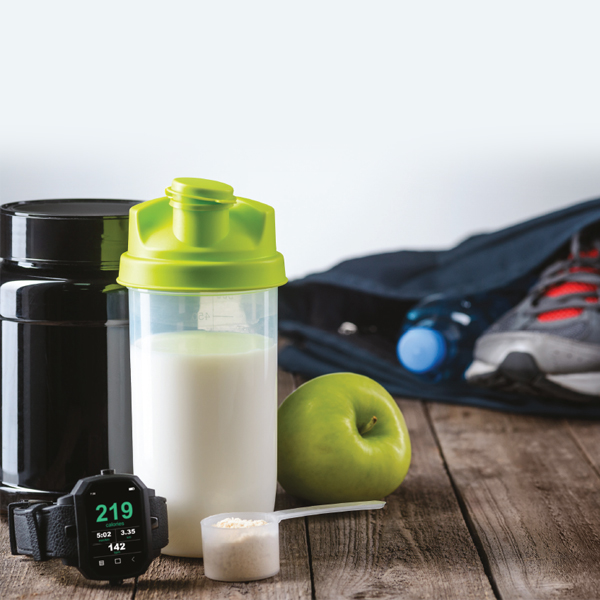