From the underground to the open market

New regulations governing the sale and production of marijuana derivatives in California shed light on an interesting sector, which could rapidly grow across the US and, potentially, other global markets. Jim Banks speaks to Chris Coggan, CEO of Therapy Tonics, about how the world’s view of CBD and THC is changing, and what the new regulations mean.

In late 2018, the US state of Michigan passed Proposition 1, making it the first Midwestern state to legalise marijuana. In doing so, it became the 10th US state to vote for legalisation of the drug for recreational use, while 33 endorse its use for medical purposes. The legalisation of both medical and recreational marijuana in the US is creating a market for its main derivatives – tetrahydrocannabinol (THC) and cannabidiol (CBD) – as ingredients in many food and beverage products, and it is a market with enormous potential.

“There is a great market here, though it is smaller than projected because of the regulatory landscape,” says Chris Coggan, CEO of California-based company Therapy Tonics. “It could be a $5 billion market just in California, and across the whole of North America it could be worth $30 billion.”

Therapy Tonics exists to create innovative and healthy alternatives to the traditional consumption of marijuana for medical and therapeutic purposes. Its products, which are usually used as additives to drinks, deliver a consistent and measurable dose of THC, which is the main psychoactive compound in cannabis. It has a range of medical applications including the treatment of conditions such as insomnia, glaucoma, nausea, pain, muscle spasticity and anxiety.

Coggan also runs Therapy Pure Essentials, which focuses on products containing the hemp derivative CBD, which has many similar applications, but which is also used to treat seizures, inflammation, psychosis, migraines and depression. Unlike THC, CBD has no psychoactive effects. While both compounds have similar structures and bind with cannabinoid 1 receptors in the brain, CBD binds very weakly and can, in fact, interfere with the binding of THC and so reduce its psychoactive properties.

The creation of Therapy Tonics came from a sincere belief in the naturopathic properties of THC, which had long been used – illegally – by those seeking to relieve pain and pursue a healthier way to medicate many common ailments. Now that consumption of THC, in California at least, is not a clandestine activity, Coggan is keen to promote its benefits as an ingredient and to meet the needs of a rapidly growing market with highquality products that deliver a known and measured dose of the compound.

“There are large demographics coming online as consumers, such as professional women between 26 and 45, and senior citizens. They have grown up with marijuana being demonised and there is a stigma around it still. My grandma will never smoke a joint. So, we have to help them control the dose for medical and recreational use, which is why we have developed additives for coffee. We sit at the cross section of three markets – the $21 billion coffee market, the functional drinks market and the cannabis market,” he explains.

“Many people use our drinks like creamer in their coffee. The aim is not necessarily to get high. It is about relieving pain, taking the edge off, quelling anxiety and increasing focus. It is about finding the functional dose that makes your day better.”

A joint effort to regulate the market

The challenge of regulating a market that has previously operated illegally and in which the legal and controlled alternatives must compete, is a complex one. The transition from an underground market to a legal and transparent industry demands not only a clear and consistent set of rules to enable business to operate effectively, but also the management of public perceptions.

The Medicinal and Adult-Use Cannabis Regulation and Safety Act (MAUCRSA) creates the general framework for commercial cannabis in California. The state’s new rules contain some key points for the control of the growth and transportation of cannabis, including a policy of allowing deliveries anywhere in the state, regardless of local municipalities’ bans, in what is seen as a victory for manufacturers. Another positive step was the decision that retailers will be responsible for child-resistant packaging, which could potentially save on cost for manufacturers and growers.

While contract manufacturing is not fully endorsed under the new rules, it may be allowed in certain circumstances. Licensed producers of edibles can potentially make and package products on behalf of an unlicensed business, but there is complex process to navigate in order to make this possible.

“Many people use our drinks like creamer in their coffee. The aim is not necessarily to get high. It is about relieving pain, taking the edge off, quelling anxiety and increasing focus.”

There are also concerns in the industry that the reliance on the state’s track-and-trace system, Metrc, means production and shipment are vulnerable to any disruption to the system’s operation. Furthermore, the new regulations continue to stipulate that testing labs must own all of the vehicles that collect samples for testing, which brings a significant cost burden.

“Regulators still do not understand the market,” says Coggan, who is a member of lobbying group California Cannabis Manufacturers Association (CCMA). “Our goal is to achieve practical regulations and a recognition of the industry. The latest rules were 18 months in the making and the regulators have been working with us. We helped them to clean up the rules.

10
The number of US states in which recreational marijuana is legal.
US Government

“The government has two key focal points – first, public safety and second, tracking the new legal market to extract taxes. As a manufacturer, we pay 24% excise tax at state level, 5% at municipality level and then there is the sales tax that the customer pays. Consumers end up paying 50% tax, which means that the illegal market remains cheaper. The fact is, however, that legal products are safer. There are, for instance, stricter pesticide controls than in the tobacco industry, and tracking is more stringent than in the pharmaceutical industry,” he adds.

The rules on pesticides are indeed stringent. California is the only year-round sun-grown state in the US but if a cannabis crop is grown next to other crops on which pesticide is used, then the cannabis may fail its final testing and have to be destroyed. There are also clearly defined caps on potency for edible cannabis products, which can only contain 100mg of THC per package or 10mg per serving. All products also require resealable and child-resistant packaging, which causes concern among manufacturers about the environmental impact of secondary or tertiary packaging.

“There are still many issues to clean up in the regulations but, so far, most manufacturers have been over-compliant,” says Coggan. “The packaging issue is a hard one to solve, given the focus on public safety.”

“I became politically engaged two years ago and I have seen a mutual respect and dependence evolve between manufacturers and regulators, who have often used our language in the regulations. One area in which we are still hogtied, however, is research.”

Reap the rewards of collaboration

Cannabis, though legal in some states, is still seen as a Schedule 1 narcotic at a federal level. This classification is largely for substances with high abuse potential, no medical use and severe safety concerns, and it includes heroin, LSD and cocaine.

$1 billion
The value of the Californian hemp industry.
US Government

“Our industry really needs the highest standards and we must meet them because California will be the biggest cannabis market in the world,” notes Coggan. “We need education and engagement with the public, but it is a very challenging environment. Track and trace from seed to sale accounts for 47% of our wholesale costs before anything else, including labour costs. Compliance costs here are really high.”

Despite all of the remaining challenges, Coggan has high hopes for the development of the industry, partly because of the good working relationship that has been developed with the state’s regulators. He believes, however, that what is needed is more research in order to engage with the public and with regulators from a strong platform of evidence about how cannabis compounds can he used safely and effectively as ingredients.

“In California, both medical and adult use are regulated, so it is the only place to build a brand outside the state or even outside the US,” he remarks. “With THC and CBD, however, there is a lot of evidence about its efficacy, but there are few peerreviewed studies.

“The next battle will be CBD. There are thousands of shops that sell it here, but the Department of Health stated that it was still viewed as a Schedule 1 narcotic, as a shot across the bows of the hemp industry, which is worth $1 billion in California. In the new regulations here, however, it is only Schedule 6, so there is progress.”

Some parts of the new regulations, which contain many positives for manufacturers, were nevertheless unexpected and present barriers to producers who want to broaden their market and build an effective model for the industry.

“A deregulated market has stifled innovation and created a high barrier to new entrants,” says Coggan. “Some elements of the new regulations came out of left field. For instance, they outlawed co-manufacturing or white label manufacturing, even though this is really important for the cannabis market. It is also hard to get state licences, as only 36% of municipalities allow cannabis activity, many of which have caps and mandate green zones that are set a minimum required distance from, for instance, schools and churches.

“The regulators have, however, figured out a workaround. They want transparency, but by changing the definition of ownership they are able to audit anyone involved in the production of cannabis, even if it is through a co-production agreement. It is a temporary solution, but it gives more opportunities for smaller manufacturers to branch out on their own, particularly as more municipalities open up.”

In fact, a regulated market could, according to Coggan, lead to a decrease in crime, including drink driving. In an industry that has the potential for enormous growth, there is an opportunity to establish a model that works for consumers, manufacturers and regulators. Nevertheless, everyone expects that process to be slow. 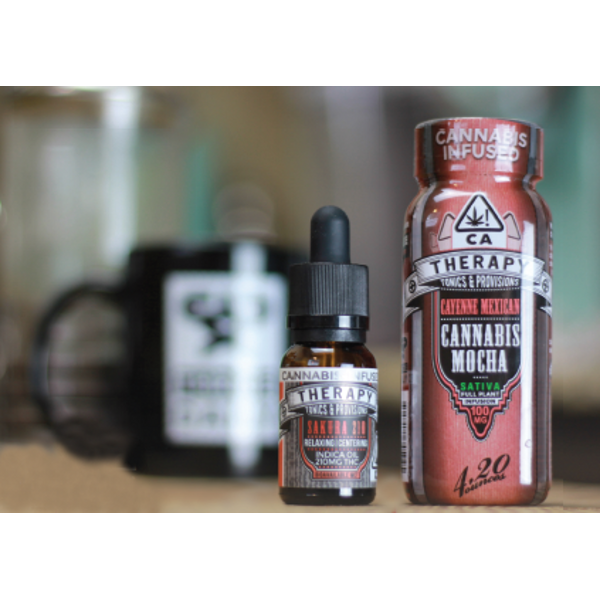 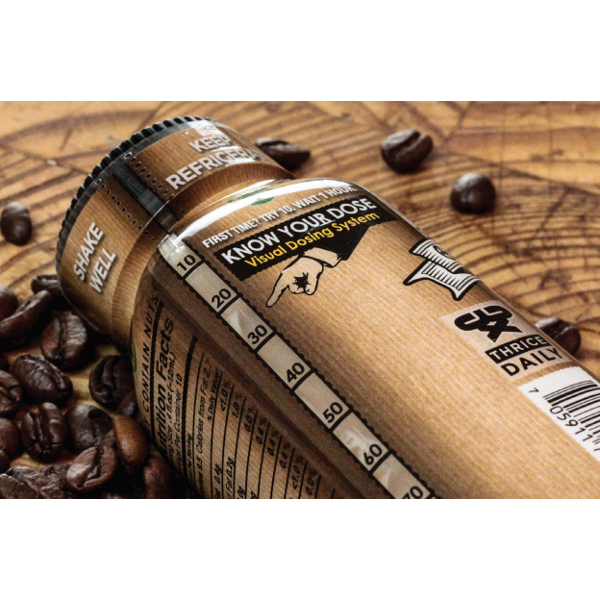 CBD can be infused into coffee products to make the idea of its consumption more acceptable. 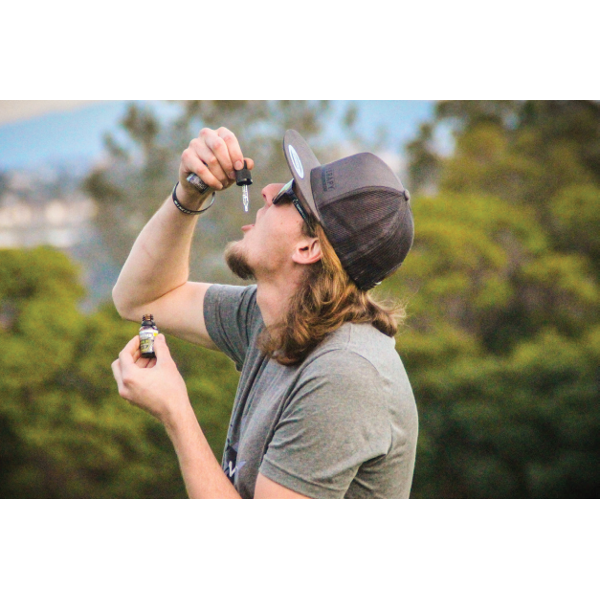 New oils can be used on the go, and treat pain and anxiety.
Post to: