Break the Grasse ceiling - the Women in Flavor and Fragrance Commerce

The flavours and fragrances industry has long been dominated by men in white coats, but efforts over the past half a century to open it up to women have steadily made their mark. In this special report, Sarah Williams takes a look at the work of the Women in Flavor and Fragrance Commerce, and speaks to current president and Trendincite founder Amy Marks-McGee about what the future holds for women in the industry.

It's a world often shrouded in secrecy: look at a label on any consumer product and just one or two words might summarise the contributions of numerous multidisciplinary experts. A fragranced bar of soap or a fruit juice made with 'natural flavours': these words are often all the hints we get of their hard work. But, as well as keeping its secrets safely guarded, fragrances and flavours - like many other industries - has traditionally kept the drawbridge raised in another sense, too.

For the longest time, few women have been able to break what one might call the 'Grasse ceiling' - the barrier to marginalised groups' advancement in fragrances and flavours. Those trying to make it in the male-dominated industry often found themselves up against an established and extended boys' club that worked together, golfed together and moved up the food chain together.

It was against this background, in 1982, that the Women in Flavor and Fragrance Commerce (WFFC) was established in the US. Primarily working in some of the most male-dominated areas of the industry - sales, purchasing, technology and operations - the organisation's female founders wanted to claim a space of their own. They aimed to create a context in which they could discuss business, share knowledge and enjoy a sense of camaraderie, community and professionalism.

Current WFFC president Amy Marks-McGee served on the board for nine years before taking up the role last year. Having left a career that included spells at IFF, Noville (later purchased by Firmenich) and Givaudan to set up her own trends and marketing consultancy Trendincite in 2006, she admits that it was only upon taking on the role that she realised just how valuable women-run industry organisations such as WFFC could be.

"When you're in big corporate companies and attend industry events, you find that you tend to stay with your peers and colleagues instead of networking with others in the industry," she says. "It wasn't until I launched my company that I became actively involved in WFFC and really saw the benefits."

Under the tagline 'Educating, engaging and empowering', WFFC sets out to recognise the achievements of women in the fields of flavours and fragrances, and create opportunities for networking, education and career development. The organisation has three chapters in New Jersey/New York, Chicago and Cincinnati.

The June Recognition Dinner honours perfumers, flavourists and industry leaders selected by WFFC members, while the Annual Gala - WFFC's signature event, attended by over 600 industry members - honours a leading woman within flavours or fragrance, with the focus shifting between the two sectors in alternate years.

The honouree for 2015 was Shawn M Houser, director of snacks and grocery product development at The Hershey Company, for her successful career developing and commercialising chocolate for the brand, which she first joined in 1996. Accepting the honour at the event in October, Houser encouraged attendees to support each other in business by "pulling up a chair at the table for another woman".

This encouragement could well be used to summarise WFFC's overall aim, and it is at the heart of the organisation's fourth key event - an annual golf outing. Effectively beating the old boys' network at its own game, the event invites women to enjoy the sport for themselves or to try it for the first time while discussing business and opportunities.

A glance at the 'big four' in the industry makes it clear that women are likely to need all the help they can get from each other to climb to the top of the ladder. The CEOs of each of the big four companies - Givaudan, Firmenich, IFF and Symrise - are all male, and while some women have emerged within the C-suite, it is slow progress.

"In maybe the past 20 years or so, we have seen more women reach higher positions within fragrance and flavour houses, but there is a glass ceiling," Marks-McGee says. "But I think there has been more opportunity and women have assumed higher positions. Joy Atkinson [president of body and home care, North America] at Firmenich, for instance, has excelled."

Marks-McGee, who describes herself as having 'fallen into' the industry, says that one problem is a lack of awareness. Initially aiming for a career in travel, a recruitment agent sent her to a marketing job at IFF, where she discovered a new and exciting world - one that she hopes more women will enter over time.

While some roles have become more accessible to women, many of the more technical areas remain primarily male.

"Evaluation on the fragrance side is heavily women-dominated, as is marketing. Generally speaking, in the sciences, research and development, and perfumery, there are women perfumers and flavourists, but there is definitely room for more women in these positions," says Marks-McGee.

A core consideration is how to capture women's attention early enough to ensure not only that they are clued up about the opportunities, but also that they arrive suitably qualified.

The job of a flavourist, for example, requires a background in science, but in many countries, far fewer women go into STEM subjects. In the UK, the number of male undergraduate students in engineering, computing, physical sciences and maths combined is more than three times that of female students.

Marks-McGee points to some promising developments, though, with a handful of tailored programmes not only offering an opportunity for women to gain the skills they need, but also helping to make the industry more visible to prospective students. This, she feels, will be essential to opening up opportunities to more women.

"New York's Fashion Institute of Technology (FIT) offers a recognised cosmetic and fragrance marketing programme, and many women study there to become evaluators or marketers," Marks-McGee says, which creates a foundation for women in the industry that leads to jobs in the houses. "And other institutions offer food-science programmes, such as Rutgers in New Jersey. So there is definitely an education component, and I think that those specialised programmes with more of a focus in our industry are really important."

In support of this, WFFC offers two educational grants: the WFFC Flavor Scholarship Award and the Rita Flynn Memorial Fragrance Scholarship Award, named in memory of a strong industry figure who paved the way for many other women through her work at Roure Bertrand Dupont in the late 1970s. Also under discussion, Marks-McGee reveals, is an idea to develop a mentorship programme.

"Whether you are in research and development, marketing or sales, mentors are really important for support and professional growth," she says. "Having a sounding board and someone to ask business and technical questions is vital, particularly for the younger generations.

"I also think that, in general, there could be an opportunity to speak to children earlier than college age, to expose them to the fact that the fragrances and flavours industry exists, and the types of opportunities there."

For those further progressed in their careers, the task of seeing more women in executive leadership positions remains a challenge. In big corporate enterprises, Marks-McGee is less optimistic about big gains in C-suite positions in the next few years, because male executives hold on to these positions and there is still a very male-dominated culture when looking towards succession plans.

"I think we're making inroads but I think it will take a while," she says. "I see women having their own businesses, and I see that happening in the near future. Becoming presidents of Givaudan and Symrise and IFF, though - I don't see that happening so quickly."

While women succeeding at the top of the biggest corporations is a coveted goal, the rise in women-owned companies to which Marks-McGee alludes is nothing to be sniffed at. Many women recognise the opportunity to move out of corporate and set up their own companies, and as these grow, so do the leadership opportunities for women.

"It's essentially the next generation of fragrance and flavour houses," Marks-McGee says. "Of those leaving to start their own consultancies or move into new positions, many are women, and they're founding their own organisations. I think there's a real opportunity there."

A notable example of this is Colibri Scentique, one of the flavours and fragrances industry's first certified companies that is completely owned and operated by women, under the leadership of president and founder Cheryl Sarno.There is also The Lermond Company, founded by WFFC vice-president Erica Lermond McDonnell alongside her sister and father, in 2014, and certified by the Women's Business Enterprise National Council.

At this point, it's worth mentioning that WFFC is in no way a women-only zone. Known as 'subscribers', non-female participants are welcome to attend many of WFFC's events each year alongside its female members, with the exception of smaller workshops, skills sessions and member-specific networking events.

In this way, WFFC hope to foster the skills of women while creating a space for all members of the industry to support one another and share learning - whatever their gender. 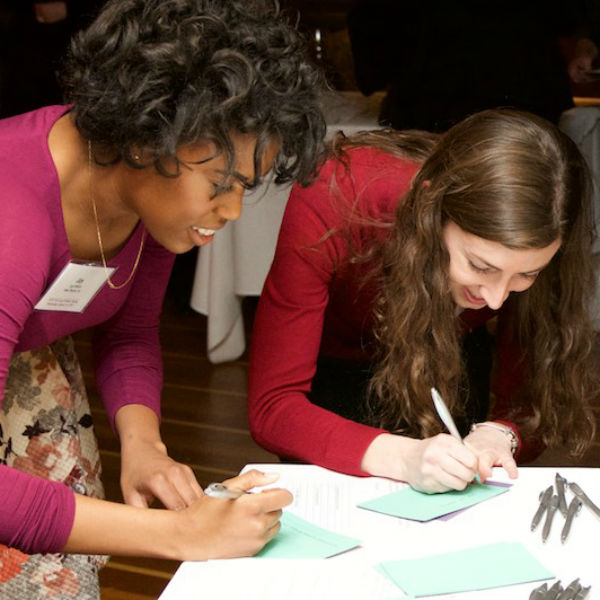 WFFC members take part in a networking exercise at the Annual Business Meeting. 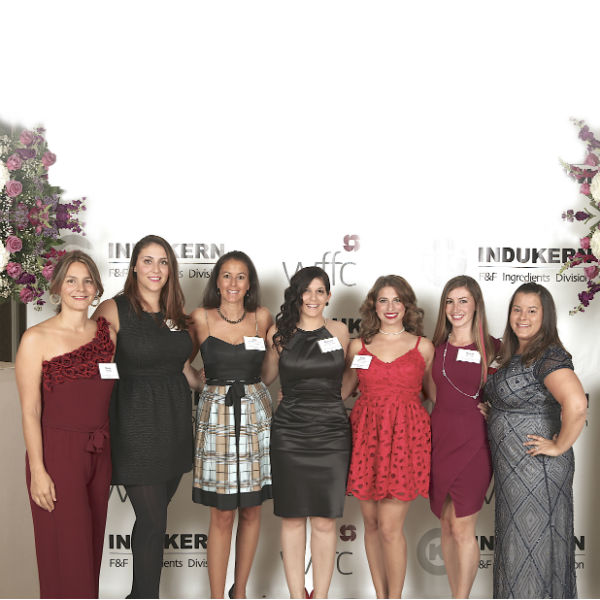 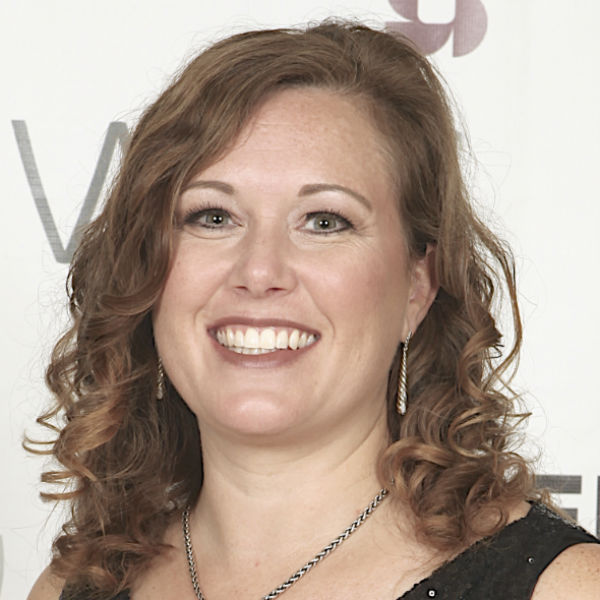 Shawn M Houser, director of snacks and grocery product development at The Hershey Company, was the 2015 honouree at WFFC's Annual Gala.
Post to: