Marine protein astaxanthin is a reddish pigment that belongs to a group of chemicals called carotenoids. It occurs naturally in certain algae and causes the pink or red colour in salmon, trout, lobster, shrimp, and other seafood. Astaxanthin is taken orally and topically for a range of indications – but what’s the evidence behind the health claims? Abi Miller discusses the benefits with Allen Levine, Natural Algae Astaxanthin Association (NAXA) president.

When it comes to potential health benefits, astaxanthin punches above its weight. Although it may not be the best known product in the supplements aisle, for many researchers in the field, this unassuming marine protein is one to watch. Studies have found possible roles for astaxanthin in eye and brain health, sports nutrition, inflammation reduction, immune function and skin elasticity among others. On the basis of recent market trends, it does appear consumer awareness is increasing. A recent report by IMARC Group projected that the global astaxanthin market will grow at 6% a year over the next five years. Another report, by MarketsandMarkets, has pegged that growth rate at 8.3%.

While its use as a colourant is part of this picture (astaxanthin is routinely used to add a splash of colour to fish feed), the market growth is mostly being driven by nutraceuticals. Food supplements in general have performed well since the start of the pandemic, with many people considering new and proactive ways of looking after their health. Astaxanthin is well positioned to appeal to a generally health-conscious demographic, as well as those seeking younger-looking skin, and anyone looking to boost their exercise performance and recovery.

Levine’s passion for the subject matter is clear. A veteran of the natural products industry, his love of astaxanthin was evident long before he became NAXA president in February 2020. “I have taken it every day for years,” he says. “The release of each new study reinforces my choice to incorporate it into my diet.”

Astaxanthin is commonly derived from Haematococcus Pluvialis (HP), a freshwater microalgae found in temperate regions across the world. Most of the time, the HP algae is green, but when placed under stress it produces large quantities of a blood-red compound, astaxanthin. A powerful protector, astaxanthin guards the cells against UV light, temperature fluctuations, dehydration and starvation. In some cases, the dormant algae can live for up to 40 years without food or water.

When plankton and crustaceans feed on the microalgae, they too retain the astaxanthin, which eventually gets passed onto their own predators. If you’ve ever wondered why wild salmon are pink, it’s because of astaxanthin. The compound helps to power them through their arduous journey upstream, as well as protecting them against the sun and preserving their bodies against oxidative damage.

A marine and nutraceutical powerhouse

Astaxanthin is a type of carotenoid – an antioxidant pigment that protects plants during photosynthesis. Antioxidants also serve a role in the human body, mopping up harmful oxidants called free radicals and preventing cellular damage. To put its potency into perspective, astaxanthin has 54 times more antioxidant capacity than beta carotene, the carotenoid found in carrots. And unlike most carotenoids, it is able to penetrate cellular membranes, meaning it could reverse oxidative stress in many different parts of the body. Advocates call it the “king of the carotenoids”, with some justification.

“HP astaxanthin can move throughout the human body. It can cross both blood-brain and blood-retinal barriers,” says Levine.

The chemical was first isolated and identified in the 1930s, by German scientist Richard Kuhn, who was dissecting a lobster. However, it wasn’t until 1987 that the US FDA approved astaxanthin as an additive for fish feed. Twelve years later, it was approved as a dietary supplement and the evidence base has been mounting ever since. While further research is needed in many areas, the results from many existing studies have been promising. “HP astaxanthin is by far the most researched form of astaxanthin,” says Levine. “There are dozens of studies looking at its antioxidant effects, anti-inflammatory effects, and its effects on brain, skin, retinal, and cardiovascular health as well. Recently, HP astaxanthin has also been getting attention for its effects on immune response.”

He adds that synthetic astaxanthin – which is typically derived from petrochemicals as opposed to algae – may not have the same effects.

“The issue comes down to which types have been the subject of the most studies,” says Levine. “HP astaxanthin is by far the most studied and has been on the world market for more than 20 years. Other types of astaxanthin lack the amount of safety data and clinical efficacy that come with HP astaxanthin.”

The strength of the evidence base for HP astaxanthin really depends on which health effect is being claimed. It’s important to recognise that not all the studies in the field should be given equal weight – a small animal study is no substitute for a rigorous clinical trial. However, there are a few key areas in which astaxanthin does seem to bring real benefits.

The ingredient is often used as an ingredient within high-end skincare products, and for good reason. In one landmark 2006 study, 49 healthy middle-aged women were given 4mg of astaxanthin a day, or a placebo. At week six, a dermatologist assessed their skin condition. The astaxanthin group showed significant improvements in fine lines, wrinkles and skin elasticity.

There have been more studies since, with similarly encouraging results. One review written in 2018 argued that: “due to its collective diverse functions in skin biology, there is mounting evidence that astaxanthin possesses… important nutraceutical applications in the field of dermatology”.

A recent report projected that the global astaxanthin market will grow at this rate per year over the next five years. Another report, by MarketsandMarkets, has pegged that growth rate at 8.3%.

The chemical was first isolated and identified more than 90 years ago, by German scientist Richard Kuhn, who was dissecting a lobster.

“There are dozens of studies looking at its antioxidant effects, anti-inflammatory effects, and its effects on brain, skin, retinal, and cardiovascular health. Recently, HP astaxanthin has also been getting attention for its effects on immune response.”

Some of these functions include protecting against UV rays, repairing DNA damage, reducing inflammation and enhancing the immune system. Despite the wealth of serums, balms and beauty oils containing astaxanthin, studies suggest that the strongest skin effects come from oral supplementation.

Meanwhile, the carotenoid’s effect on exercise performance is hardly in doubt, assuming you’re a salmon. Astaxanthin allows them to achieve astonishing feats – swimming non-stop for a week through raging rivers – through staving off oxidative damage in their muscle cells. While astaxanthin probably won’t help the average human to swim the Channel, it may help with strength, endurance and recovery.

“The antioxidant strength of astaxanthin has been compared to other carotenoids and it has always been shown to be much greater.”

A study from this year demonstrated that competitive cyclists taking 4mg of astaxanthin for four weeks saw a 5% improvement in a cycling time trial.

In a 2011 study sponsored by Gatorade, competitive cyclists taking 4mg of astaxanthin for four weeks saw a 5% improvement in a cycling time trial. Another study found that athletes taking astaxanthin registered a drop in lactic acid, while yet another found a reduction in oxidative stress among elite male soccer players. A 2018 review was a little more muted in its conclusions. It stated that, though animal studies have shown positive results, there isn’t enough evidence to say for sure whether those benefits are replicable in humans.

“The current efficacy surrounding astaxanthin supplementation in exercising humans is somewhat equivocal. This is evidenced by the limited number of well-controlled scientific investigations in this research area,” wrote the authors.

Because of its antioxidant properties, astaxanthin may play a role in preventing and treating various ocular diseases. Studies suggest it might serve a protective function against eyestrain, as well as improving retinal blood flow and visual acuity. It may also be effective in staving off cataracts and macular degeneration. However, it’s important to recognise that this research is at an early stage, meaning that additional research into the carotenoid’s influence on ocular health is required. A 2020 review found broadly positive results, but advised that: “further long-term clinical trials are warranted”.

Likewise, Astaxanthin has also been touted as inducing protective effects on heart health, again due to a reduction in oxidative stress and inflammation. For instance, it might help support healthy blood flow, and help the body maintain normal levels of cholesterol. However, most of the studies in the field are small and many fail to show a significant effect.

Lastly, since boosting our immune system has acquired a new urgency in light of the Covid-19 pandemic, some consumers are taking astaxanthin for its notional effects on immune health. Again, the evidence base in humans is fairly limited, but there are a few studies that point in this direction. The thinking is that, since immune cells are particularly sensitive to oxidative stress, a potent antioxidant may go some way to reducing that damage.

While we should take some of the ‘wonder supplement’ claims with a pinch of salt, it’s clear that astaxanthin holds promise across a number of application areas. What’s more, consumers can rest assured that it is safe and won’t bring undesirable side effects. Further research is already underway to establish precisely how this unique pigment operates within the body and what further benefits it could bring to users. As the trade organisation for producers of natural astaxanthin, NAXA is always working to expand the evidence base. It is currently working on two studies, both due for completion by the end of 2021.

“The first looks at different forms of astaxanthin on a molecular level” says Levine. “The second compares four forms and their effects on anti-inflammatory response. We are already seeing some differences in the preliminary results, and we hope to have full results soon.”

Looking towards 2022 and beyond, he would like to see still more research initiated.

“We plan to continue to provide consumers with accurate information about HP astaxanthin so that they can make informed choices,” he says. “I would invite people within the natural products industry, as well as consumers, to visit NAXA’s website to find more information; with links to a book as well as many studies covering a wide range of subjects.”

It wouldn’t be surprising if, in years to come, astaxanthin becomes much better known, with name recognition to rival omega-3 or CoQ10. For the time being, its many loyal users continue to swear by its benefits. This isn’t a bad outcome for a humble algal protein that originated as a reddish tinge in a rock pool. 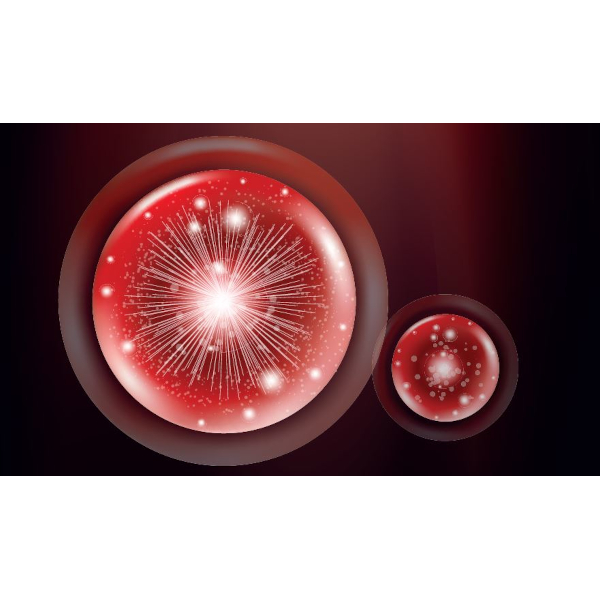 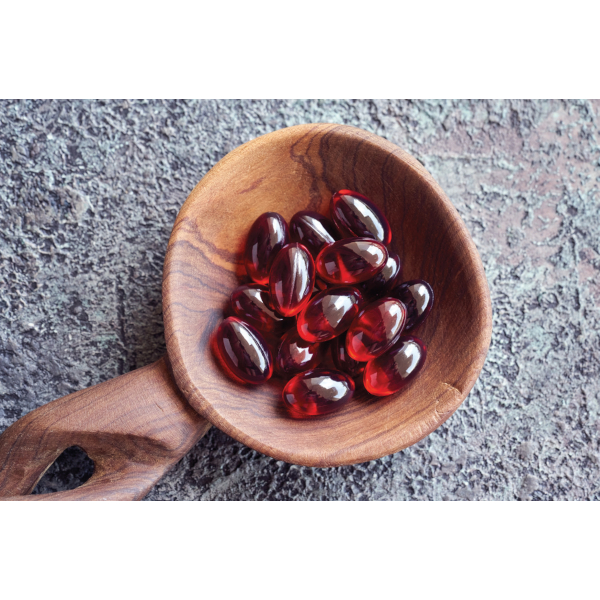 Astaxanthin has the strongest effect on skin when taken orally.
Post to: