Vitamin K2 MK-7 is poised for widespread consumer uptake in the immediate future due to its superior bone and heart health benefits. Kappa Bioscience has the vision to deliver vitamin K2 to the mass market, making it accessible for everybody, everywhere. Positioned for unlimited-scale market opportunities, the company offers customers a strong partner in the development of new market growth with K2VITAL.

The origin of K2VITAL dates back to 2006, when Norwegian researcher Dr Inger Reidun Aukrust, together with her team, discovered a process to produce all-trans vitamin K2 MK-7, using natural compounds such as geraniol and farnesol in a strictly controlled synthesis process.

The significance of the process for all-trans vitamin K2 MK-7 has been recognised and patented. For vitamin K, two stereo-chemical versions can exist: cis and trans forms of the molecule. The cis form remains biologically inactive, while the trans form has a full biological potential. Commercially available vitamin K2 products may contain both forms.

Why we need vitamin K2 MK-7

The effect of vitamin K2 MK-7 in your body is highly different from the effect of vitamin K1 even though the function of K as K1 or K2 is principally the same. This is because vitamin K1 has a very short half-life and rapid excretion, and is thus predominantly used by the liver for blood-coagulating purposes. While sufficient for these purposes, the short half-life prevents the vitamin from being redistributed to extra-hepatic tissues in sufficient amounts. Vitamin K1 therefore is found to have very limited cardiovascular or bone health influence.

On the other hand, vitamin K2 MK-7's long (72-hour) half-life enables the vitamin to be distributed to extra-hepatic tissues, and thus affect cardiovascular and bone health.

The health and well-being demands of today's consumer are continually escalating - the quest for optimum childhood development and a longer, more active adulthood is a high priority. Yet, the incidence of negative bone conditions and cardiovascular diseases remains high, inhibiting optimum health across life.

The World Health Organization (WHO) cites that heart attacks and strokes represent 29% of all global deaths, making cardiovascular diseases one of the most prominent causes of early mortality.

After 30 years of age, bone mass decreases in men and women (osteoporosis). This affects one in three women and
one in five men globally with no discrimination based on geographical location.

Today's consumers are vitamin K2 MK-7 deficient and largely unaware of the vital role it can play in supporting an optimum healthy lifestyle. Hence, Kappa Bioscience's aim is to make vitamin K2 MK-7 available for everybody, everywhere to deliver the best possible bone-building and cardiovascular-health support, and minimise the risk of cardiovascular disease and early mortality.

The solution for bone and heart health

K2VITAL vitamin K2 MK-7 is a key vitamin for supporting the positive uptake of calcium when combined with vitamin D3.

This is called 'tri-essentials' - calcium, vitamin D3 and vitamin K2, working symbiotically to deliver the most optimal bone and heart health to consumers. 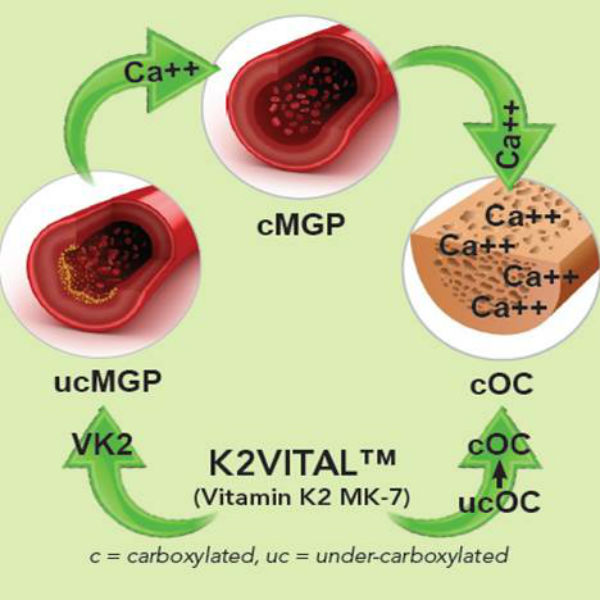 Vitamin K2 MK-7 keeps calcium “mobile” in the arteries and assists in depositing calcium into the bone mass.