Hemp's versatility is making it increasingly popular across industries, particularly within the ingredients market. Tony Reeves, managing director of Hempco's European division, discusses the benefits of this cross-category, high-protein ingredient and the opportunities it offers UK farmers post-Brexit.

Fresh from the Future Protein Summit in London, Tony Reeves, managing director of Hempco Europe, is energetic. He attributes his vigour to the vital ingredient in his morning smoothie: the company's Planet Hemp range of protein powder.

"Since moving from a traditional English breakfast to my hemp and banana smoothie, I feel totally ready for the day," says Reeves.

Breaking down animal proteins requires the body to work harder than when digesting the plant-based version. Hemp's globulin protein resembles what is found in human blood, which enables it to be metabolised more efficiently. It also contains eight essential amino acids and scores high on the digestibility index.

"High-quality protein means you can enhance existing products across multiple categories," Reeves says. "At the summit, there was keen interest in our high-protein snacks, including hemp coconut chips, cacao bites and macaroons. They were about 20% protein, which is really high for a macaroon, for example. Snacks are usually an indulgence, so why not give people something that tastes great but also has health benefits?"

If 20% or more of the calories present in a food are from its protein component, that food may be labelled 'high-protein', and this is considered an attractive property.

"Protein is a selling point in the West," Reeves says. "It is a real consumer hook. The strategy is not just to sell bags of hempseed in health stores; it's to say we're enhancing existing products, which could be anything from sorbet to macaroons, and everything in between."

Hempco, founded in Canada, has been in business for over 15 years, during which time it has perfected a solvent-free, five-stage mechanical process that creates the cleanest seeds for the healthiest, tastiest products.

No matter how healthy something is, or how good it may seem for the environment, people tend to buy products in interesting packaging, at the right price. Health benefits are additional.

"You have to look at categories that are already popular with the consumer and taste great," says Reeves, "and on the back of the packet it says it is good for you and the planet."

Reeves predicts that health will be the ultimate marketing strategy, as consumers notice the benefits of dietary shifts, but it requires popular supermarkets to believe they can present the relevant products in a saleable way.

'Plate dominance' is crucial. Protein alternatives need to look and taste good enough to replace meat. An interesting model is quinoa, which has evolved from a "back-of-pack ingredient to a front-of-pack statement", Reeves says. These days, Jamie Oliver is using it, as are Kellogg's and Uncle Ben's.

Reeves is heralding a "hemp renaissance". Indeed, due to the general mood, Reeves says the environmental benefits of hemp are prompting increased political interest. He is having productive discussions with the private and public sectors across Europe and Australia, and with major NGOs such as GAIN in Geneva, exploring the hemp production opportunities in Africa.

It is neither sustainable nor feasible to coninue feeding the world on animal products.

While hemp protein can pump up a morning smoothie with a powerful dose of easily digestible protein, the plant has so much more to offer. As a fast-growing crop with big yield, dairy farmers in particular could benefit from switching to hemp.

Not only could it boost profits and make consumers healthier, but hemp might also extend this fragile planet's longevity. 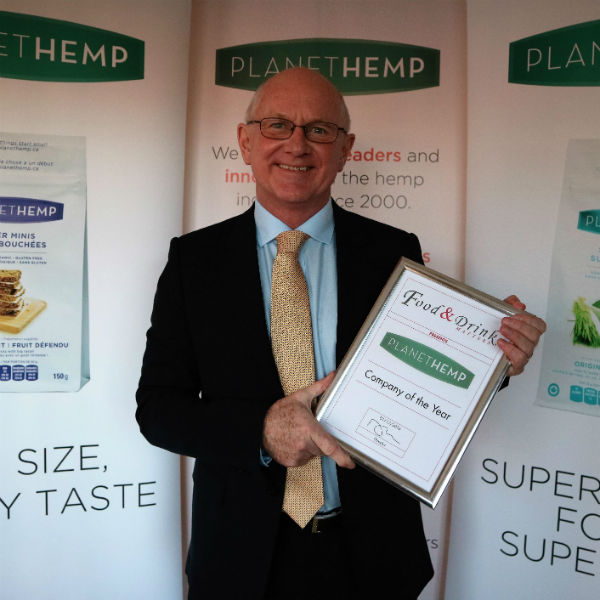 Tony Reeves collects a Food & Drink Matters Award for Company of the Year on behalf of Hempco Europe.