Brudy Technology is a specialist in medical nutrition based on the human health benefits offered by the docosahexaenoid acid (DHA). Brudy decided to learn from observing DHA in human physiology, with the intention of imitating it; from this, it has discovered the best way to offer DHA to humans for optimal absorption, among other findings.

To evaluate digestive absorption, an oral dose-response trial was performed in five groups of healthy volunteers, in Carlos Contreras' 2014 thesis, 'Modification of oxidative damage in a cyclist group after consuming docosahexaenoic acid at different doses'. All actively supplemented groups reached PUFA red blood cell membrane concentrations significantly higher than the placebo group, with a dose-dependent response. A significant reduction in the omega-6/omega-3 index was also detected in the actively supplemented groups.

Carlos Contreras' study demonstrated that after an intense effort-load in sportsmen, significantly lower levels of oxidised DNA metabolites were recovered from the urine. In addition, significantly lower serum levels of lipid peroxidation could be detected after two weeks, and after three months of active supplementation, compared with placebo.

In clinical studies of patients suffering dry eye syndrome, three months of DHA supplementation was associated with a significant reduction in the tear cytokine levels and the improvement of symptoms compared with non-supplemented subjects.

A 2013 study by Andrea Oleñik also showed that clinical symptoms, signs, and quality of life improve significantly in patients with Meibomian gland dysfunction.

Significant anti-inflammatory effects at the macula level (in reduction of thickness and improvement of visual acuity) have also been proven in a new clinical trial, awaiting publication, of type 2 diabetic patients suffering diabetic macular edema, treated with anti-VEGF medication and supplemented with DHA for 24 months.

The molecular process for oxidative prevention (MPOP) permits keeping DHA molecules stable in water emulsions for years, protected from oxidation with no addition of antioxidants. For the first time, drinks including omega-3 PUFA can be produced with no fishy odour or taste.

The MPOP technology enables the production of gels and cosmetics, eye drops, and any kind of drink or drinkable food for children. 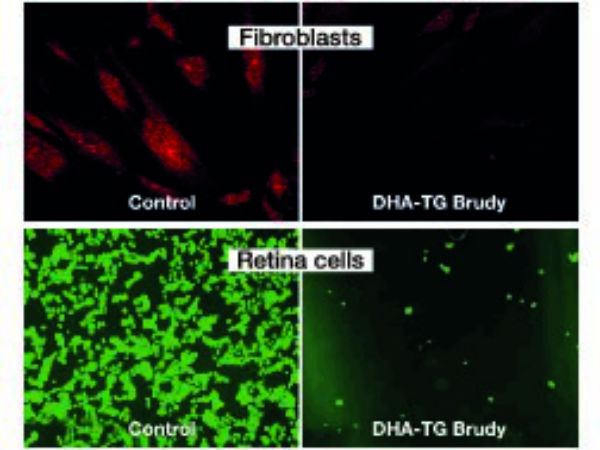 A 50% reduction in fluorescent free-radicals production is seen when human cells are previously incubated in Brudy’s DHA-TG before the induction of oxidative stress.